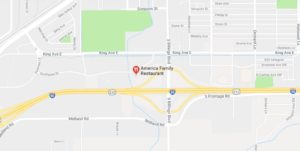 BILLINGS – A Billings man was sent to the hospital Sunday afternoon after what witnesses said appeared to be a fight or dispute with his girlfriend according to Billings Police.

Sgt Brent Becker told Q2 that a 38-year-old woman hit the 37-year-old man with a blue Buick around 4 p.m. Sunday.

Witnesses said that the man and woman were arguing near the America Family Restaurant near South Billings Boulevard. The woman tried to get the man into her car when he slammed the door and walked away. According to witnesses he then picked up a rock and threw it at the car. He started walking on the sidewalk when the woman drove up and struck him.

The incident occurred between the Sleep Inn and Comfort Suites.

Sgt. Becker said the man was transported to a Billings hospital because he was complaining of back pain.

It is unclear if the woman was detained or charged yet.

This is a developing story. Please check back for updates.