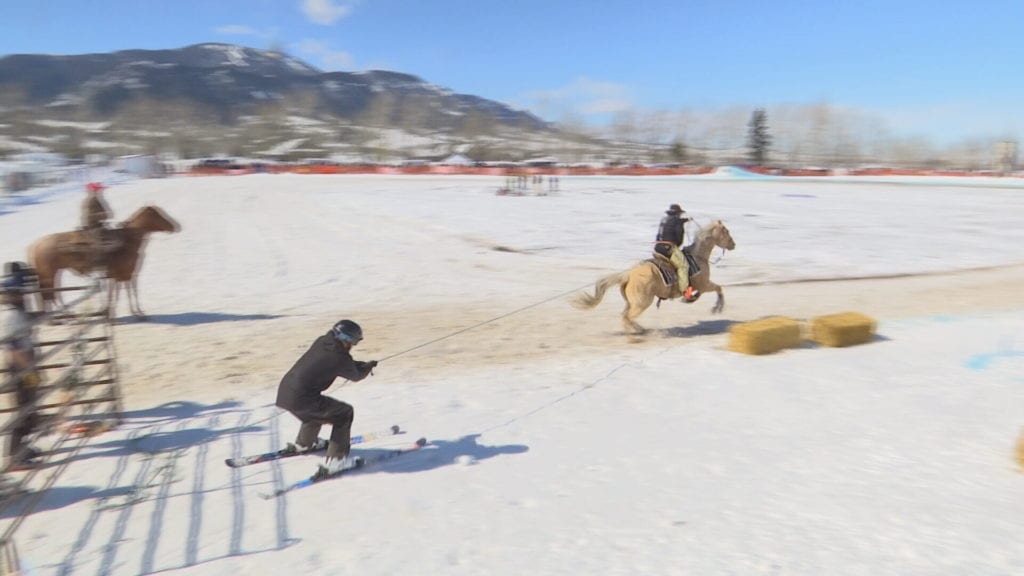 A coordinated team with a skier, reaching speeds up to 35 miles per hour.

“You’ve got cowboy life and extreme skiing that collide to make up this amazing sport,” said Kristen Beck, who has been one of the organizers of the races for three years.  “It’s just an adrenalin fueled sport.”

“It originated in Scandinavia as a form of transportation and then the west transformed it into an action packed sport.

Beck also competes as a rider.

Ski-joring brings about a unique team.

“The athleticism of the horse, the rider and skier is second to none,” Beck said.  “It’s three heartbeats.  So you’ve got a rider, a horse and a skier.  And you have to all work together.”

“Your horse has got to be going fast, always looking back at you,” said Braden Tomlin, a skier from Red Lodge. “And the rider has got to stay up. It’s pretty big.”

“It’s a blast,” Tomlin said.  “It’s so much fun to just be pulled behind a rope and going as fast as you can. Obviously if you’re going down a slope, you’ve got momentum from the hill. But being pulled by a horse is some of the most fun you can have.”

“I’ll still go downhill skiing a lot,” said Sarah Bean, a skier from Bozeman. “That’s fun, but this is a whole new experience.”

“We try to put on a really good show, a safe race for the competitors,” Beck said. “But we also like making a really good community event

The Ski Joring competition in Red Lodge started in the mid 1960’s and the is the second oldest in the country.

A competition in Leadville, Colo. started in the late 1940’s.