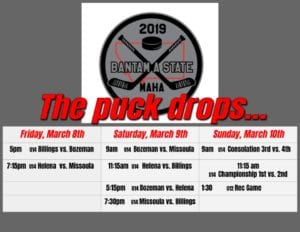 BILLINGS – Billings’ Centennial Ice Arena had to cancel the remaining matches set for this weekend’s Bantam A State hockey tournament due to a malfunctioning compressor.

All games have been rerouted to Bozeman’s Hayne’s Pavilion located at the Gallatin County Fairgrounds.

Matches will resume this evening after regularly scheduled events are over.

Dillon Layman, the facilities supervisor at Centennial stated that the problem was severe enough to move the event.

He said that the season would likely have had to shut down about two months early if they had tried to keep the arena open.