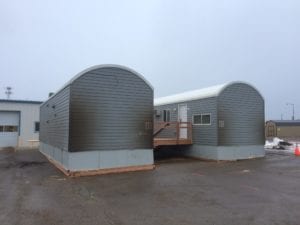 So, firefighters have been living in mobile housing units for weeks, while the future of their fire station remains unknown.

However, one thing is known for Fire Chief Branden Stevens: the fire station needs to be dealt with.

“It does present a few challenges that we didn’t have before,” Stevens said Tuesday.

The new housing units sit next to the fire station at 2800 Main St., so as calls come in for help, firefighters have to respond from the housing units when they sleep to the station.

Stevens said recently a building inspector said the fire station could be used on an emergency basis.

The foundation of the fire station is shifting and the slabs of concrete where the fire trucks sit are broken and uneven. On top of that, there are drainage problems all around the building.

The fire station has since been deemed structurally unsafe.

As the snow piles up in Montana, this winter was a real concern for Miles City’s fire department. Firefighters couldn’t be housed in the existing station in case the roof caved in.

“The guys feel a lot safer in the new units but are sad to have moved out of the fire station. It’s been home for a lot of us for a lot of years,” said Stevens.

He says in the meantime he is working with the city and an architect from Billings to draft a proposal for a new fire station.

Stevens said the department has a community meeting planned soon to update the public on the progress.

“Most of the feedback from the public has been very supportive,” said Stevens. “They see the challenges that we are faced with and generally ask what they can do to help.”

In the meantime, more equipment is being moved out of the fire station and into storage at a location outside of town.

The mobile housing units were donated to Miles City by TransCanada.