BILLINGS- A longtime downtown staple in the Billings restaurant scene will open its doors later this year with a new menu, vibe, and name.

Construction is underway currently on what will soon be Buffalo Block Steakhouse at the Rex.

“It will be top of the line,” said Rick Larson, who bought the shuttered Rex restaurant at 2401 Montana Ave. last year.

Larson said he never really intended on entering the Billings restaurant business, although he’s no stranger entrepreneurship. He started a Billings-based EBMS, an insurance-administration firm in 1980.

These days, he’s enjoying retirement coming back to Billings from Cabo to check in on the construction and spend time with his grandkids.

“When I told my wife I bought the Rex, she wasn’t really happy with me,” Larson joked.

However, when the iconic building shut its doors in February 2017, something inside Larson sparked.

“It was always my go-to place for steaks, so when they closed down it was kind of sad,” he said.

He said he waited to see what would take place with it.

But the idea of owning the Rex was too special to pass up. 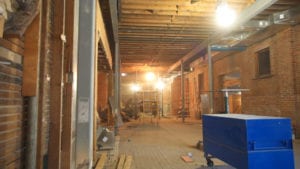 Inside now, the place is completely gutted. But it’s a blank slate in Larson’s mind, and he has an extraordinary vision.

“This is the fine dining area, we will have some booths over there, tables out here,” Larson said, pointing to areas inside the construction zone.

He is creating a high-end steak house, something unlike anything else currently in Billings, with clean white linens covering the tables, impeccable service and steaks cooked in a fire stove.

“We are going to do an open, wood-burning cooking area so it will be different than anything else,” he said.

In a way, Larson is making his mark on Montana Avenue, a place he remembers coming as a little boy with his dad. He remembers it as the “happening place” with patrons coming and going and trains rolling through Billings.

“It’s a sense of satisfaction when you can do something different and build on something that was already great,” he said.

But his mission is to also keep the memory and glory of the Rex alive and that’s part of the reason he’s chosen to keep it in the name.

“The new bar will be here,” he points toward the brick wall. “It will be a walnut bar built in the old style, so it will look really nice, this will be the center of the bar.”

That center, he refers to is where an old ‘Rex’ sign will still stay adorned on the brick wall. 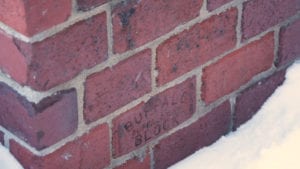 And as for its name, that’s historic too.  Buffalo Blocks Street pavers were used to line Montana Avenue back in the day. It’s a past time treasure Larson wants to carry through to the future.

When Larson envisions the opening of Buffalo Block Steakhouse at the Rex opening next fall, he sees an enticing patio, cold drinks, packed tables and of course a good steak.

“I’ll always have a table here, won’t have to worry about that,” he said. “But its fun it’s a fun project and my wife is talking to me now so it’s worked out well.” 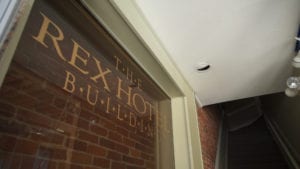