An inside look at the new, more spacious Trailhead Spirits in Billings West End

BILLINGS- Trailhead Spirits has new digs, and it’s because the business was growing faster than its previous home could handle, according to the distillery’s owner.

“Everybody has been excited about it,” said owner Casey McGowan.

After spending five years pouring unique and Montana-made spirits at next to the Historic Billings Depot on Montana Avenue, Trailhead needed some room, he said.

“We outgrew the space,” said McGowan. “We had an initial five-year lease. After the second or third year, we were pretty much full with our barrel-storage capacity.”

So on Black Friday of 2018, Trailhead made the move, to the location on the west end of Billings on Gabel Road in the same building as the Get Air trampoline park.

And although it may take some time for the usual patrons to get used to, McGowan said the response has so far been good.

“It’s been going really well. The town of Billings has been very supportive, it’s fun to see the transition moving from downtown to the West End,” he said.

The new location was started from scratch. Walls were built and painted, and new furniture was added. But what will stay the same is the award-winning liquor creations that Trailhead has been known for.

McGowan admits a part of the move has also been bittersweet. That’s because Trailhead had to say goodbye to surrounding businesses in the downtown corridor, where camaraderie was formed.

“What we will miss most is the community. We had a lot of friends and neighboring businesses that we created a lot of synergy with down there on Montana Avenue,” he said. “And having that real close-knit downtown community feel that we lose out here, where businesses are spread out a little farther apart.”

Still, the benefits of more space inside were attractive, he said.

McGowan said that after just a few years into their lease downtown, his business already started to run out of room and for a few years he tried to make it work. Now, Trailhead has more room, and McGowan feels the distillery is reaching a new wave of patrons, those coming from the surrounding West End.

“The traffic has been great, the flow. People are finding us, and we are getting a lot of new customers,” he said.

Inside the new facility is a clean and modern look with new tables and a new and intricately crafted bar. As customers walk into the bright and spacious tasting room, there are large windows where they can get a glimpse of the massive silver and copper distilling machines, sitting comfortably in an adjacent room.

“Trying to create a space that was completely new and different, but still had our own stamp to it, that made it a nice place to come and hang out,” said McGowan.

There is also a larger room for the barrels to be stored, something McGowan says was not in the former location and was needed in order for the business to grow at a higher level.

And that is really his goal, to see his business grow and to serve Billings in an inviting atmosphere.

“It was time to move on and get more space and the timing just worked out right with the lease coming up and the opportunity to come to this space and it all just kind of funneled toward making the move,” he said.

As for what goes into the former Trailhead location, McGowan says there will be a local-only beer and wine bar that should be opening very soon. 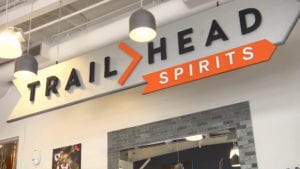