In ‘unsafe’ Miles City fire house, cots and mobile units brought in for firefighters to sleep

BILLINGS- Time is running out for firefighters in Miles City as the building that houses their engines, trucks, ambulances and the firefighters themselves has been deemed structurally unstable.

However, the fire chief says he has a fix, for the short term anyway.

The fire station, which sits on Main Street in Miles City was built in the 1950s, and, according to Fire Chief Branden Stevens, the building was never meant to be a fire station.

“Our firefighters are housed in an old portion of the building,” said Stevens.

And that is the area of the building where there is a concern.

“Last January got a phone call from one of the guys, it was a Saturday and it was kind of a warmer day in January,” said Stevens.

The firefighters said it was raining in the building. That was when Stevens knew there was an immediate issue with the building.

Stevens said the foundation is starting to shift, and the slabs of concrete where the fire trucks sit are broken and uneven. He added there are drainage problems all around the building, from the roof to frost heaves that force the floor to move.

Wednesday Stevens pointed out damage to the ceilings and where water leaks into a bathroom light fixture near where the firefighters sleep.

Recently, a structural engineer came and took a good look at the building, Stevens says that’s when it was deemed structurally unsafe and, Stevens was told, they needed to get out and soon. 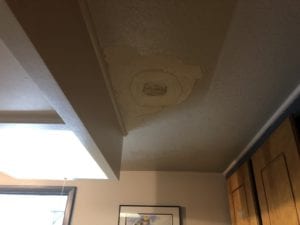 For the staff, the winter time is also a major worry.

As the snow starts to gather on the roof, the firefighters will be forced to move out of their sleeping quarters and sleep on cots in another area of the building where there was an addition done in 1994.

“We do have the cots ready to go if the roof does start collapsing and it becomes unsafe,” he said.

But that can only be temporary, said Stevens.

“Long-term, it would be kind of like a camping trip, which is fun for a night, but to say we are going to spend the next three years on cots- it’s just not feasible.”

There are three major objectives Stevens is working to solve: Take care of an emergency housing situation, find a facility to store the fire engine and third, work with an architect to design plans for a new firehouse.

“That will help keep our firefighters safe,” said Stevens.

But the fire department has been making due.

“We just have been very passionate about providing services to the citizens of Miles City and trying to overcome the challenges that we are faced with,” he said.

Stevens says the long-term plan is to present that design to the public and ask for a bond to build a new and safer station.

In the meantime, Thursday will bring sleeping quarters for the firefighters by way of Texas.

The units were donated from a grant from TransCanada, said Stevens.

“Currently we feel that the firefighters are safe but that time is running out and we have passed that window of comfortability, if you will. We aren’t comfortable with our guys in the building with the state of the building.”

Stevens hopes to bring a plan to the public and have a solution by the fall of 2019. 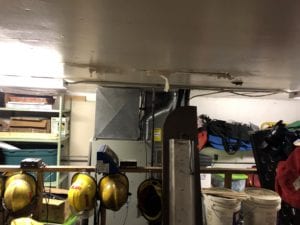