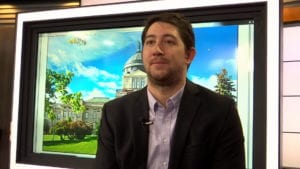 BILLINGS- You may think you own your DNA, but one Montana lawmaker says, you don’t and he’s out to change that.

Billings Republican Rep. Daniel Zolnikov wants Montanans to have a say in whether DNA is shared with advertisers. So, this Montana legislative session, Zolnikov is pushing a bill that will allow Montanans to choose whether to share their own DNA.

Have you ever taken an online ancestry test? or do you use face recognition on your cell phone?

Zolnikov says each time you do, you share whats called biometric information with the world, and that information can be shared, sometimes for a price.  Biometric information is anything on your body that identifies you, such as your facial features, the veins in your palms, your retinas and even your heartbeat.

“Do we want to live in that world?” said Zolnikov. ” I think we should be able to travel about without there being a tracking system on you.”

The ‘latest and greatest’ technology in our world is collecting our DNA in real-time and its constantly being shared.

“This is the world that we are entering and there are no limits on it,” said Zolnikov.

Zolnikov says the measure already has bipartisan support. He will be working with a Democrat lawmaker from Missoula to make sure it goes all the way through to Governor Steve Bullock’s desk.

The goal is to give Montanans a say in the matter; an opportunity to choose.

He says it comes down to advertisers. Our biometric DNA is an identifying form of ourselves, and advertisers are using that data to help identify what establishments we frequent to adhere to our consumer desires.

“I think that we should be able to go where we want, when we want, without knowing there is a tracking device that you have not given consent for,” he said. “I don’t think that’s the world that we want to go towards and unless we put these in law today, it’s going to be too late. It’s very hard to go against industries making billions of dollars off of your information.”

The measure doesn’t yet have a bill number and this is just one of many bills Zolnikov is planning to sponsor during the session. He believes there will be buy-in from fellow lawmakers and Montanans.

“This is the world that we are entering. There are no limits on it. So you, and all this identifying information about you isn’t yours. The goal of this bill is to say you collect it and retain it without consent,” said Zolnikov

If the legislators agree, Montana could fall in line with states like Washington that already have similar laws in place. Zolnikov  said he plans to model this bill after Washington state’s with a few additions.