BILLINGS- No new angels were placed this year on a ceremonial Christmas tree that pays tribute to the lives lost from drunk driving.

The Angel tree tradition started in 1974.

Each year, an angel is placed on the tree for each life lost during the year due to a DUI crash.

Then a moment of silence is observed.

And although there were no angels to place on the tree this year, there are still three DUI death cases pending in Yellowstone County District Court. 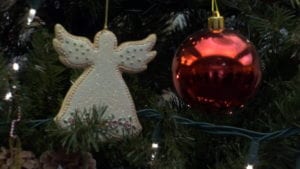 During this time, an award is given to each office who made the most DUI arrest for the Highway Patrol, the Billings Police Department, and the Yellowstone County Sheriff’s Office.