One dead after single-vehicle rollover west of Billings airport

BILLINGS- One man is dead after a single-vehicle crash occured north of Billings Friday night.

It happened just before 11:00 p.m. west of the airport at the intersection of Highway 3 and Apache Trail.

Montana Highway Patrol Trooper David Hankins told Q2 the white pickup truck was headed North on Highway 3 when the driver swerved off the road on the right-hand side.

The male was unconscious when authorities arrived on scene and was transported with critical injuries.

Alcohol is a suspected factor in this crash.

The driver was not wearing a seat belt. 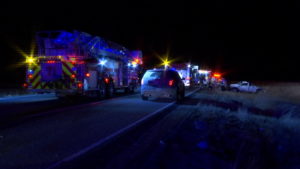