BILLINGS – The Rimrock Humane Society is taking over care for nine mixed dachshunds that were surrendered from a Billings woman with the hopes of eventually adopting them out.

But the task isn’t going to be easy due to the poor living conditions the dogs were in.

“Horrific,” said Executive Director Sandy Church with the Rimrock Humane Society. That was the word used to describe the condition of the dogs by those now caring for them by veterinarian staff.

As a general practice, Rimrock Humane Society does not adopt out dogs until the animals have been fully screened and treated by a vet.

On Tuesday, the dog’s owner brought the dachshunds to the vet clinic, which is currently treating them for numerous health issues due to their living conditions.

According to Church, the owners of the dogs, a couple living in the Blue Creek area, were forced to downsize or risk being evicted.

While the dogs are well fed and happy, Church said they all suffer from skin issues, rotten teeth, and possible mange.

To try and find the dogs a long-term home, the story of the dachshunds was shared on the Rimrock Humane Society’s Facebook page, which garnered much attention from animal lovers.

She said dozens of people have already reached out to show interest in the dogs.

“Adopting them out won’t be an issue,” said Church.

The timing of the adoptions is what’s still unknown.

“All those people who have called and emailed and Facebook messaged us, we are going to get a hold of them but the dogs are the priority right and we have to make sure they are healthy,” Church said.

Along with that, the cost to treat them is an ever challenging mission.

After tallying up the costs to treat the dogs, Church believes it will cost roughly $1,000 per dog before they are fully ready to be adopted.

By Wednesday, the dogs were happy and feeling better according to one vet tech, even chowing down on treats, despite their teeth being in such poor shape. 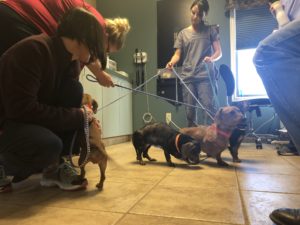 Rimrock Humane Society is a nonprofit and runs off donations, and that means the mounting vet bills for the dachshunds has Church worried and overwhelmed.

“All of these things add up. They have to be hospitalized,” she said. “We are going to have boarding fees too until they are better,” she said.

So as the dogs get the care they need, Church is really hoping those in the community will open their hearts and pocketbooks and donate.

She said people can get information on how to donate on their Facebook page, but can also send donations to Rimrock Humane Society at the address; PO Box 834, Roundup MT 59072.

More information about Rimrock Humane Society can be found here.