Montana PBR champion Jess Lockwood has issued an apology after facing criticism for a post on Twitter.

The criticism came after earlier this week Lockwood and his brother, Jake Lockwood, posted tweets referring to a Native American as a “rezzer.”

A tweet sent from Jess Lockwood’s verified Twitter account read: “So Jake literally pissed his pants laughing at this rezzer that stopped us outside the Indian depot,” followed by a laughing emoji with tears streaming down its face.

One minute later, a tweet posted from the account of Jake Lockwood read: “Drunk rezzer- can i ask you a favor? Me- ya what do you need? Drunk rezzer- what do i need?…i got water! #noDAPL #WaterIsLife”

Both tweets were deleted but not before other Twitter users captured the statements on screen grabs and launched heavy criticism at the high-profile Montana cowboys.

Earlier this week in a tweet,
I used an inappropriate and insensitive word. I am sorry for my actions and assume full responsibility. I realize that I made a mistake, I should never use that term or any other term that is demeaning. I have learned a lot in short time from this. I have many Native American friends, several of whom live on reservations in Montana and many who I compete against week in and week out. I did not intend to offend anyone and it won’t happen again.

Asking for your understanding and forgiveness,
Jess Lockwood 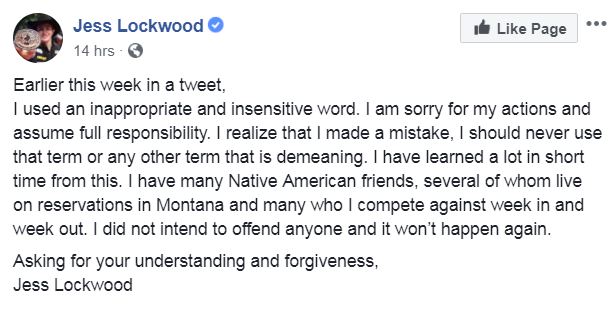