Protestors gathered in Crow Agency to voice their concerns with Not Afraid’s action in Lewistown Sunday, as well as their support for incumbent Democratic Sen. Jon Tester.

Crow Legislator Sean Real Bird said Not Afraid chose to skip the proper process required to bestow an official endorsement from the tribe.

Others spoke at the open mic at the rally about the problems facing those living on the reservation and who they think are the best candidates to help the tribe secure its future.

“I hope that people will get out and vote and understand the issues that certainly Senator Tester has helped us with,” said Angela Russell, a former Montana State and Crow Tribe legislator.

Russell specifically mentioned the Affordable Care Act (aka Obamacare) and the subject of missing and murdered women on the reservation as issues that Tester has been an ally in addressing.

On Sunday, Not Afraid took a group of tribal members by bus nearly three hours off the reservation to Lewistown, where he cited Rosendale’s support for resource development, including coal, to better develop the tribe’s economy, according to a video posted by NewsTalk 95.5.

“In order for the longevity of the tribe, to surpass my life existence, we need to do something about it now – fits the direction of Rosendale and President Trump. Fits the agenda of the Crow Tribe, both domestically and internationally … That agenda fits the Crow today, to side with the Administration and Matt Rosendale,” Not Afraid said in a statement provided by the Rosendale campaign.

In a press release, Rosendale called the endorsement “an honor of a lifetime.”

At the rally, protesters said they were concerned that Not Afraid spent tribe money busing a group to Lewistown for the endorsement and were unsure as to why an official Crow endorsement would not take place on Crow lands.

BethYana Pease, protest organizer, said she believes the votes cast in this election will show the true endorsement of the Crow people.

“I guarantee the votes will talk this year. We have satellite elections offices that are open Wednesday and Thursday, voting early, we have people picking up absentee ballots, we have people on the ground, spreading the word. I mean, this is going to be it. Tester is going to win this,” said Pease. 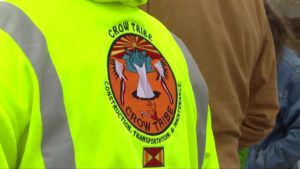