Update 12:11 a.m. – A Billings police officer has confirmed the man involved in the chase was arrested around midnight, and no police officers were injured. There was no information available about the suspect’s condition.

The public is not in danger, he said.

Update- 12:04 a.m. – Police have also surrounded an abandoned black vehicle north of the corner of Shiloh Road and Central Avenue, which may have been stolen and crashed. 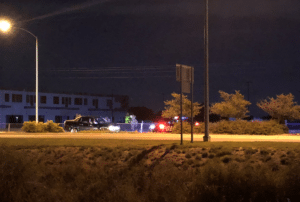 Update 11:50 p.m. – A neighbor told Q2 that he heard shots fired near the site near the corner of Highway 87 North and Doyle Road.

Firefighters are out inspecting a car that apparently crashed at the scene following a chase.

A heavy police presence remains there.

BILLINGS – Police have blocked off a road at South Billings Boulevard and Wonderpark Drive Monday night.

Residents there say an incident involving a possible arrest occurred there, which was apparently followed by a police chase in multiple parts of Billings.

Several police cars have been spotted north of Billings near the intersection of Highway 87 and Doyle Road at 11:30 p.m. It’s not immediately clear if the two incidents are related.

Q2 has reporters on the scene.

This a developing story.