LOVELL, Wyo.- An activist group working to keep the genetic bloodline of the Pryor Mountain wild horses thriving now has new plans for the herd.

This comes after a federal judge in Billings recently granted a temporary restraining order preventing the Bureau of Land Management from removing 17 wild horses from the range.

Ginger Kathrens, a documentary filmmaker and the executive director for the Cloud Foundation, invited Q2 News Wednesday to the Pryor Mountain Wild Mustang Range in the Bighorn Canyon National Recreation Area to see where the horses live. 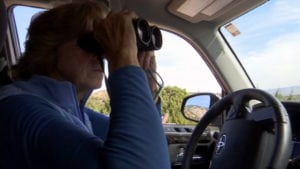 The Cloud Foundation is a nonprofit corporation based in Colorado with, according to its website, a mission to prevent the extinction of wild horses in the West. It filed the suit in federal court to block the BLM roundup.

During the trip, Kathrens was able to grab a glimpse of some wild horses, but only after a hike.

“The turf of a band stallion named Hickok,” said Kathrens, yards away from a group of horses.

This particular group of wild horses could be considered some of the most colorful horses on the range.

“The big, reddish, bay-colored horse in the middle is Hickok, and that’s his family. He has three mares and those mares have offspring, including Sundance, who’s the youngest,” said Kathrens.

The area is home to 154 wild horses believed to be descended from horses transported to the United States by Spanish conquistadors centuries ago.

It was that very primitive genetic bloodline that spurred such a lawsuit by the Cloud Foundation in the first place.

The group claimed in court documents that the removal of 17 young wild horses in the Pryor Mountain Wild Mustang Range would cause an irreversible genetic loss.  A genetic and color expert even concluded in the suit that the herd, which is located on the Montana/Wyoming border, is indeed that of a Spanish Colonial line.

“Wild horse watching is addictive, and the finding of them is a thrill because you never know where they are going to be,” Kathrens said.

Back on the range and in an area known as Dry Head, Kathrens inched closer to the horses and Hickok’s band. The youngest member of the band was born just in May and was named Sundance.

The Pryor wild horses are world famous, according to Kathrens, and represent a strong economic draw to the area.

“It’s a strong economic bonus for the area of Lovell, Wyoming, and all the little towns, including Billings. People fly into the Billings airport, they may stay overnight there and eat and maybe then come to Lovell, go to see the horses and go back to Billings. Spend some more money and have a great time,” she said.

However, management of the wild horses is important to many. For years, officials with the Bureau of Land Management gather the horses to prevent overgrazing and damage of the prairies.

Still, Kathrens feels the work of the Cloud Foundation must continue, and she hopes to expand the herd and the range.

“There’s a very beautiful land that used to be used by the horses, and we think that maybe we could work on getting that back for the horses,” she said. “We want to expand the range so that we can have a bigger population. One hundred fifty horses are the bare minimum, genetically.”

Kathrens also said under the court ruling, the Bureau of Land Management will work with the Cloud Foundation on a new management plan to allow a more comprehensive preservation of the Pryor wild horse herd.

Watters scheduled another hearing for 9:30 a.m. Sept. 28 in Billings to rule on a preliminary injunction to stop the roundup permanently.