HARDIN- Voters in Big Horn County will be faced with a big decision coming this November.

The county commission and members of the Big Horn County Sheriffs Office are launching an education campaign hoping to get voters to approve a $12.3 million jail expansion.

Among their key talking points: The measure authorizes the county to borrow from existing funds and will not trigger a tax increase.

“We have to educate the voters,” said Commissioner George Real Bird III.

The current jail was built in 1979, but officials say it’s outdated and overcrowded.

To help educate the public about the voter initiative, Undersheriff Michael Fuss took reporters on a tour of the jail on Tuesday.

“There is no room,” said Fuss. 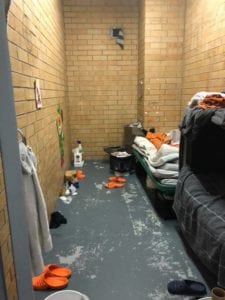 He walked reporters through the brick-lined hallways, in and out of holding cells, the kitchen and day rooms all in an effort to show where the jail needs improvements.

Those are just a few of his complaints concerning the aging facility.  In addition to not meeting industry jail standards, Fuss said the jail is simply not up to code.

“The deterioration of the jail itself,” he said.

Fuss says the current building suffers from cooling and heating deficiencies. If you stand in the women’s unit the air is hot and muggy, while in the men’s day room, the air feels cold.

Fuss pointed out exposed wire mesh in the ceilings, rusty walls and steel objects protruding from walls that he says inmates use to make weapons.

But beyond all that, it’s too crowded.

Tuesday, there were 56 inmates housed in the Big Horn County jail. The current capacity for the jail is 34.

“You’ll see how many people are jammed into one unit,” said Fuss.

Big Horn County tried to get voters to support a jail expansion once before in 2016, but it failed.  This time it’s different, Real Bird said.

“No tax increase that they will see,” he said.

Instead, the commissioners will ask voters for the authority to borrow $7.3 million and use an existing $5 million in cash the county currently has saved from coal royalty payments.

“Right now we can borrow up to $1 million, but anything more we have to ask the voter,” said Real Bird.

The county gets royalties from production of Montana coal, and Real Bird said they’ve been stockpiling that money. He said last year the county got $1.9 million in coal royalties.

“We will use those dollars to pay for a loan. Short of coal stopping tomorrow, that’s natural resource money that will be available for us to pay off the loan,” said Real Bird.

Some in Big Horn County have questioned why the nearby vacant Two Rivers Detention Center is not being used. Two Rivers is a private prison built as an economic-development tool more than a decade ago, but it struggled with a lack of inmates and closed in 2016.

Real Bird says that facility is too big and too expensive to operate. The commission believes a 96-bed jail will do just fine. Two Rivers can house up to 400 inmates.

The county commissioners said they evaluated a variety of different options to meet the growing demands of the county but believe the decision to expand the existing jail is best.

If voters elect to expand the county jail in November, commissioners anticipate paying it off in 10 years. 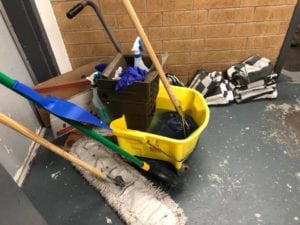