He was located unharmed with Candice Seward in the downtown area by Officers, after receiving an anonymous tip.

No arrests have been made and the investigation is on-going. No further information will be released at this time.

BILLINGS- A missing endangered person advisory has been issued for a 4-year-old boy believed to be abducted by his non-custodial mother.

Liam Davenport is 3 feet tall, 50 pounds with hazel eyes and blonde hair. He was last seen wearing a solid red lightweight jacket or a blue Thomas the Train jacket. He has a gap between his teeth

She is 5-foot-8 inches tall, 185 pounds with hazel eyes and brown hair.

Billings police said Seward has been acting erratically and may have purchased a bus ticket to outside the area to an unknown location. 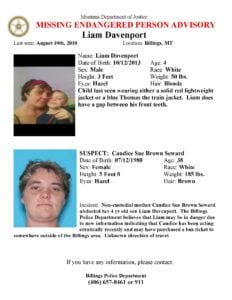