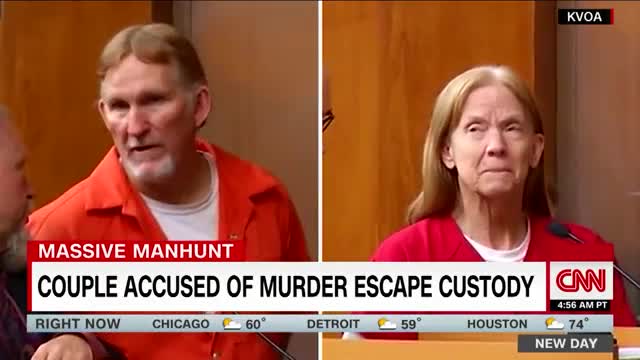 A husband and wife who are accused of killing a 72-year-old man overpowered two security officers and escaped Monday night in Blanding, Utah, police said.

Blane Barksdale, 56, and Susan Barksdale, 59, managed the escape as they were being extradited from Henrietta, New York, to Pima County, Arizona, the Tucson Police Department said.

They were being moved to face charges in connection with the death of Frank Bligh, a 72-year-old who was killed in April in Tucson, Arizona.

In that case, police responded to a fire that led to an explosion at Bligh's home. But he and his vehicle were nowhere to be found, and investigators discovered evidence that the fire was set intentionally and that Bligh had been killed, Tucson police said.

On May 1, a felony arrest warrant was issued for Blane and Susan Barksdale on charges of first-degree murder, first-degree burglary, arson of an occupied structure, felony criminal damage and theft, police said.

But the Barksdales had fled the state, sparking a nationwide search. They were located in New York and arrested without incident, Tucson Police said on May 24.

At the time, the Monroe County Sheriff's Office praised the "incredible, diligent police work" that led to their capture.

"This is another example of the excellent cooperation between local law enforcement and our federal partners," Monroe County Undersheriff Korey K. Brown and US Marshal Charles Salina said then in a statement. "Two dangerous, violent individuals were taken off the streets and will face justice."

On Tuesday, Tucson Police said the couple's direction of travel is unknown, but investigators have information that they are possibly traveling through Arizona.

They were last seen driving a red GMC Sierra pickup with damage to the front passenger side and rear bumper, police said. Blane Barksdale has tattoos on his arms and hands.

The couple is believed to be armed and dangerous, police said. The FBI, US Marshals and Apache County Sheriff's Office are also assisting in the investigation.

CNN was not able to identify an attorney for the couple.