HAMILTON – A man has been arrested and is facing a negligent homicide charge after a 10-year-old boy died in a Sunday afternoon hit-and-run incident in Hamilton.

Ravalli County Sheriff Steve Holton said Joseph McNamara, 59, was arrested in a Hamilton home on Sunday evening. McNamara is being held in the Ravalli County jail. 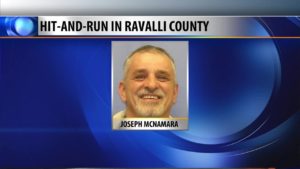 Information obtained during a traffic stop led to locating McNamara at a residence in Hamilton after a six-hour search.

The Montana Highway Patrol is investigating the hit-and-run and will release further details as the investigation proceeds.

Holton thanked everyone who called in with tips and information on the suspect and called attention to the excellent work done by the cooperating law enforcement agencies to quickly locate and arrest the suspect.

“The strong investigative work and partnerships between all of the assisting agencies is what brought the suspect into custody so quickly,” Sheriff Holton said.