Rash of vandalism, including shot-out windows, reported on Billings South Side

BILLINGS- Reports of car windows being shot out in a Billings South Side neighborhood has residents angered and concerned at the recent rash in vandalism.

Kelsey Spieler was just one of a dozen residents who woke Sunday morning to find her boyfriend’s truck’s vandalized.

“We went outside and noticed the windows were shattered on the truck,” she said.

They were getting ready to go do some last minute Christmas errands, but Speiler said the incident put a damper on their Christmas spirit.

“It was just sad,” she said. “During the Christmas time, I feel like people should be more caring about other people’s property.” 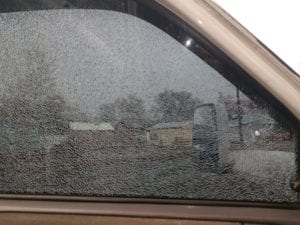 Spieler has cameras installed on their South Side home but when they went to go review the video, there were no specific identifying markers that they could give to police, leaving Spieler feeling hopeless.

She said she took to social media, to see if others were also hit with the same crime.

And turns out, others also claimed the same thing had happened to too. Some reported tires were slashed in an area along Miles Avenue.

“Another said his windows were shot out too,” said Spieler. “Others said a dog was shot south by the sugar beet factory.”

So Spieler said they drove through their neighborhood, counting 15 plus windows shot out.

“It’s sad,” she said. “I  just feel like maybe the community needs to come together to try and figure out a resolution on how we can help each other not let this to happen.”

Spieler said she contacted the Billings Crime Prevention division, but now they just have to wait it out while police investigate.

She said the cost to fix their truck will total roughly $800.

“I just want people to be aware that these things are going on. I want to work as a community to try and get this taken care of whether we have to do it ourselves or talk about it,” she said.