GREAT FALLS – Robert Spearson was taken into custody at about 5:20 p.m. on Tuesday after holding police at bay for several hours.

Numerous police officers surrounded a residence in Great Falls after Spearson barricaded himself inside at about 2 p.m. near 7th Avenue South and 10th Street South

The Great Falls Police Department said officers located a vehicle that had been reported stolen and the driver of the vehicle ran and barricaded himself inside the building.

Officers, some with weapons drawn, negotiated with Spearson for hours and told him to come outside or to open up the door, or they would come inside.

The SWAT team was also at the scene. 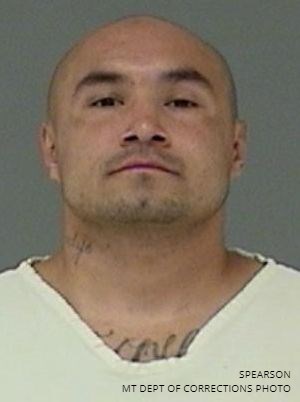 According to the Montana Department of Corrections, Spearson is on parole and was wanted on a warrant in Kalispell. He has criminal convictions in Cascade County for assault with a weapon and criminal endangerment.

Police said they found a gun in the car that he was driving.

There were no reported injuries.