Report: 97,000+ children tested positive for COVID-19 in the last two weeks of July 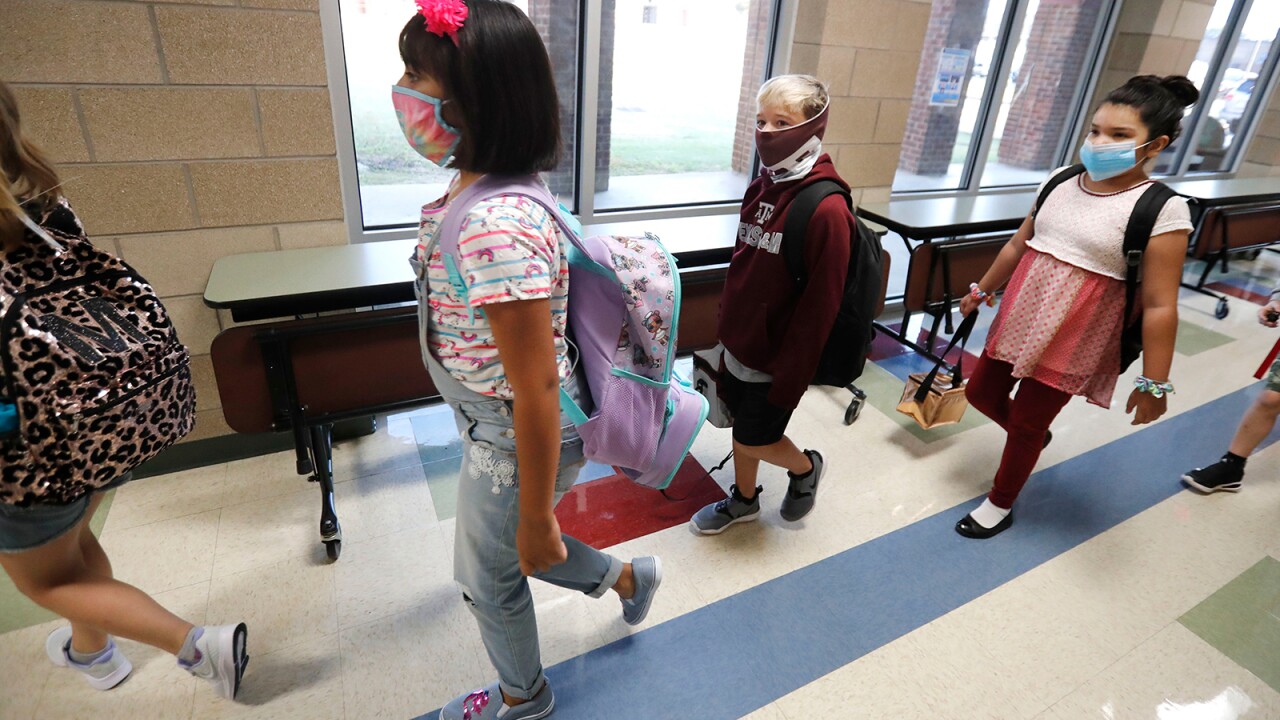 Copyright 2020 The Associated Press. All rights reserved.
LM Otero/AP
Wearing masks to prevent the spread of COVID19, elementary school students walk to class to begin their school day in Godley, Texas on Aug. 5, 2020.

More than 97,000 children in the US tested positive for coronavirus in the last two weeks of July, a new report says.

The report, published by the American Academy of Pediatrics and the Children's Hospital Association, said in those two weeks, there was a 40% increase in child cases across the states and cities that were studied.

The age range for children differed by state, with some defining children as only those up to age 14 and one state -- Alabama -- pushing the limit to 24.

The compiled data comes during back-to-school season as health officials are trying to understand the effects of the virus on children and the role young people play in its spread. Some schools have begun welcoming crowds back to class and others have had to readjust their reopening plans in response to infections.

In one Georgia high school that made headlines after a photo of a crowded school hallway went viral, nine coronavirus cases were reported, according to a letter from the principal. Six of those cases were students and three were staff members, the letter said.

While some US leaders -- including the President -- have said the virus doesn't pose a large risk to children, one recent study suggests older children can transmit the virus just as much as adults. Another study said children younger than 5 carry a higher viral load than adults, raising even more questions about their role in transmission.

At least 86 children have died since May, according to the new report. Last week, a 7-year-old boy with no pre-existing conditions became the youngest coronavirus victim in Georgia. In Florida, two teenagers died earlier this month bringing the state's death toll of minors to seven.

Some parents and educators have protested heavily against a return to in-person instruction at a time when the virus is still out of control across the country.

The US topped five million reported infections over the weekend and at least 162,938 people have died since the start of the pandemic -- more than in any other country in the world.

The country reported more than 1,000 daily deaths for at least five days in a row until Saturday, according to data from Johns Hopkins University. Since July 21, there have been only four days during which the US recorded fewer than 1,000 virus-linked fatalities.

In Florida, which saw a staggering spike in cases over the summer, Sunday marked the thirteenth consecutive day the state reported more than 6,000 new positive tests in a single day, according to a CNN tally.

State and local officials have tied the resurgence in cases to large group gatherings and more infections among younger people.

Dr. Anthony Fauci implored young people last week to heed to guidelines, saying during a webinar with the Alliance for Health Policy, "don't be the weak link in the chain."

"That's the message we've got to get to young people," he said. "Obviously they're not doing anything deliberately and maliciously, but what they're doing is inadvertently -- they're propagating the outbreak."

60 violations in bars and restaurants

Despite continued warnings, it's still business as usual in some parts of the country.

Many Americans are still moving around as much as they did before the pandemic, according to Dr. Christopher Murray, director of the Institute for Health Metrics and Evaluation at the University of Washington.

"If you look at the mobility data collected from cell phones in many parts of the country, we're almost back to pre-Covid levels of mobility, so we're just not being as cautious as other people are in other countries," Murray previously told CNN.

Hundreds of thousands are on the move for a massive event in a small South Dakota town taking place this week: the 80th annual City of Sturgis motorcycle rally. City officials say the event has brought about 500,000 tourists in past years and while they have recommended guidelines like social distancing and limited capacity for bars, none of that is legally enforcable.

In other places, failure to follow safety precautions has led to repercussions.

At least 60 bars and restaurants in New York were issued coronavirus-related violations Friday and Saturday, according to a news release from the governor's office.

"We need the NYPD to step-up and help in New York City and we need local governments across the board also to do their job, Gov. Andrew Cuomo said.

In Hawaii, Honolulu police were out and issuing citations after a new order by the mayor essentially closed beaches during the day in efforts to slow a recent rise in cases and hospitalizations.

Officers issued more than 200 citations Saturday to people who were at beaches, parks or involved in large gatherings, according to CNN affiliate KHON. People who received citations will have to appear in court, the affiliate reported.