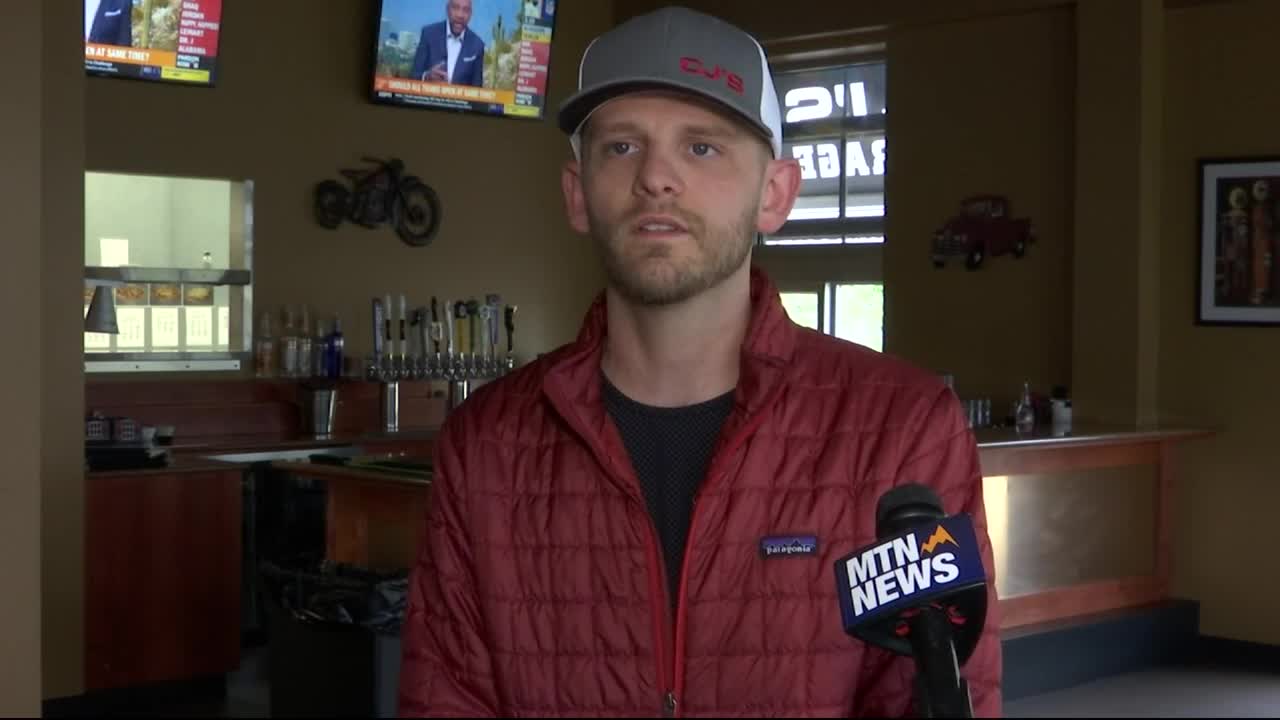 BILLINGS — Managers at Billings restaurants Bistecca at the Granary and CJ's Bar and Grill say they had decent customer turnout during their first week back operating under state-mandated sanitation and social distancing procedures.

Management at both restaurants told Q2 on Monday that Mother's Day was the busiest night of the week.

"Friday night was a good night. Saturday was decent. And then last night, being Mother's Day, we had a lot of to-go's but we also had a lot of people come in and sit down and enjoy with their mothers and their families. So it was good," said Pat Maglich, Bistecca general manager.

All bars and restaurants in Yellowstone County closed March 17 by the order of Health Officer John Felton to slow the spread of COVID-19. They reopened May 4 as part of Gov. Steve Bullock's phased reopening of the state.

For now, Bistecca no longer offers lunch. Instead, it's only operating the dining room, bar for dinner. Take-out service established at the restaurant within the four weeks will continue. Maglich said the restaurant is aiming to start delivery with GrubHub and UberEats services within the coming month to make up for the lost lunch crowd.

“From the scene that we did lose, maybe we’ll get some food going out in that manner and get some dollars back into the business. But we have had a couple of good nights, some good crowds. We’ve had three good nights, so it’s been good," Maglich said.

CJ's Bar and Grill owner Matt Burton said Mother's Day was similarly busy at his restaurant with in-house and take out orders. As well, last Monday was a similar day numbers-wise to a pre-pandemic Monday.

“The initial push Monday was actually a really good day. When you step back and look at the numbers and how they compare them to other Mondays when we’re not in a quarantine phase. And they were actually really comparable," Burton said.

CJ's was already offering takeout prior to the pandemic, so Burton said it wasn't necessarily difficult to initially change how the business operated. Over the last week, while offering dine-in and take-out, many have opted not to stay and eat.

"As the week went on, we got the idea that take out was probably going to be our main go. As you may know, you've got a lot of people out there, half are kind of wanting to go out and are over this whole quarantine thing, and then you have the other half of us that want to stay in," Burton said.

At Bistecca, Maglich said it seemed like take-out and dine-in orders would all come in around the same time over the first week open.

"It gets a little hectic in the kitchen at times because it seems in Billings, everyone is eating at 6 p.m. or 7 p.m. Everything kind of hits at once. So it's kind of slow at times. It depends on what items they pick from our limited menu that we do have out," Maglich said.

Under state and county restrictions, both restaurants had to reduce their capacity by half to allow social distancing in order to open. Other requirements included enhanced cleaning plans, staff training, and no patrons were allowed to sit at the bar.

“We are doing all of the precautions in-house to keep safe with distancing and cleaning so people should feel safe when they do come in and enjoy our facility and patio when it does open up and the weather gets straightened out," Maglich said.

A lot of the first people into CJ's on Monday last week were the regulars. Burton said for the most part, people complied with the new procedures, other than one gentleman who didn't realize he couldn't serve his own soup.

“The whole city has been more than understanding with what’s going on. They want to come out here and they want to come to a safe environment and truly I think we have been," Burton said.

Around 50 people are employed by CJ's, and the number rises slightly in the summer months. Burton said he rehired all of his previously laid-off front-of-house staff. The entire kitchen staff was able to keep their jobs throughout the closures except for two dishwashers, who were rehired last week.

“We might be a little overstaffed at times but the way we look at it is we are just lucky that we can provide other people their jobs back so they can support their family and themselves in this time of need," Burton said.

Unfortunately, a few members of the Bistecca kitchen staff had to be let go because of the drop in business, but the front-of-house staff was hired back, Maglich said.

“We allowed them time to find another job and said just 'at this time we don’t have anything. And right now we don’t know how long that’s going to be.' It’s all up to the governor and the health departments when we go into phase two, phase three and get back to full opening. So we don’t know. So we gave them a chance if they found something else, then they could do that. Because I can’t say 'you’re going to be back in a month,' because no one really knows right now,'" Maglich said.

There has been no indication made by Montana Gov. Steve Bullock on when he will move the state further along through his reopen plan. Authorities are watching the level of COVID-19 cases and strain on the health care system to inform further decisions.

Both restaurant owners thanked the Billings community for its support during the COVID-19 pandemic.

“A business like this really, truly relies on the support of the community. And we (couldn’t) be more grateful to the city of Billings. And that came on night one of takeout. People were calling in the whole time," Burton said.