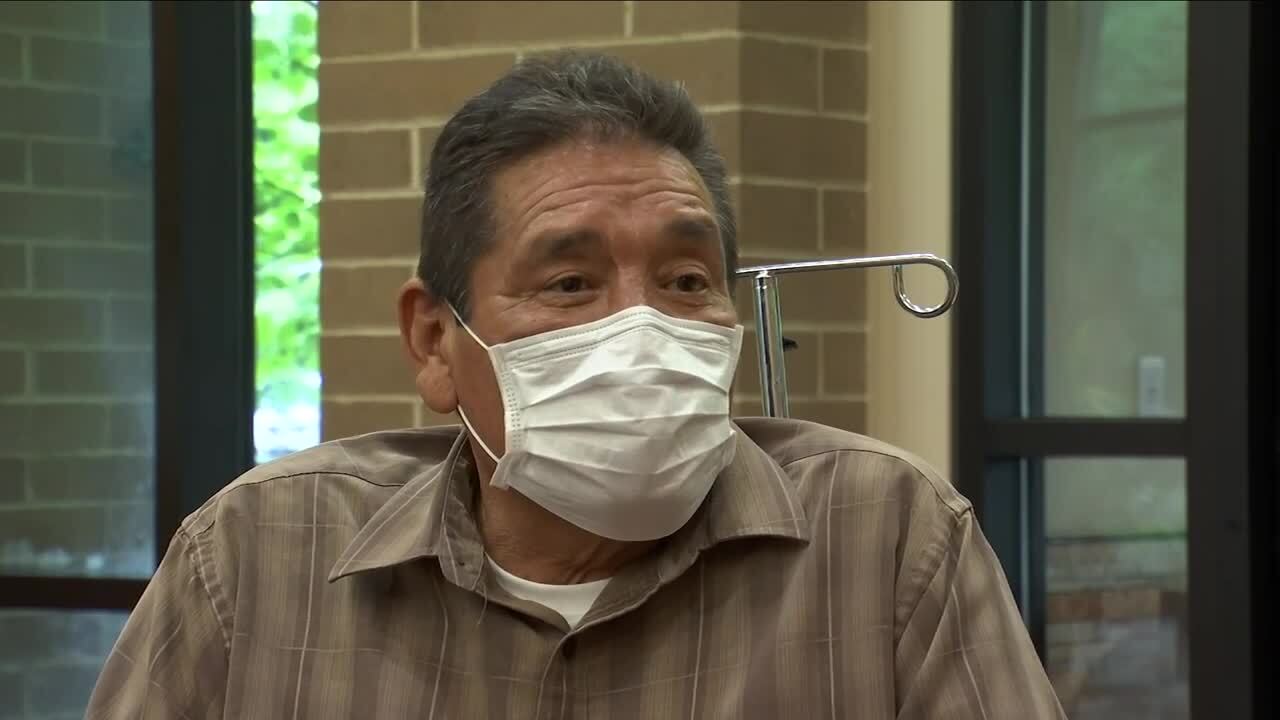 BILLINGS — Billings resident Irvin Risingsun, 62, was discharged from St. Vincent Healthcare Monday to a standing ovation from doctors and family after a nearly three-week fight with COVID-19.

“I was counting the minutes, seconds," Risingsun said after being wheeled to the hospital lobby.

Dr. Gerri Mournian was the physician who ordered Risingsun's discharge. She is St. Vincent's chief hospitalist, overseeing the care of patients who spend long periods of time in the hospital.

"I went to his bedside this morning. I asked him how he was doing. He turned to me. He had a big, radiant smile and I said, 'you look like you might be ready to go home today.' And he said, 'Oh, I am so ready.'"

Medical staff from the hospital lined the corridor leading into the lobby, cheering and clapping as Risingsun was wheeled to the lobby to the sound of The Beatles' tune "Here Comes the Sun" playing from a speaker.

Mournian said Risingsun's discharge "represents the very best outcome and it gives us all a warm, fuzzy feeling. I would say for the patient, what that represents is courage, strength and lots of hard work because they are living through this, which can’t be easy.”

Over those 21 days in the hospital, Mournian said the hospital staff became like family to Risingsun, because of strict rules allowing no visitors to prevent further spread.

“The people were really helpful. They helped a lot. They kept me going, kept my morale up," Risingsun said.

Risingsun was able to keep in touch with his two kids Josie, 36, and Chris, 28, over the phone during his time in the hospital. Risingsun's kids and slew of grandkids were all at St. Vincent to see him in person for the first time in weeks.

“It was the best feeling in the world to see them all healthy," Risingsun said.

“It was the longest three weeks ever," Chris added.

Josie said her father's resilient spirit helped keep the family's hopes up during the difficult time while he was hospitalized.

“For me, it was really stressful. I was riddled with anxiety the whole time, especially when I first found out. But throughout it, he’s always been really confident and strong, surprisingly for me because I was scared. I’m so proud of him. He’s a lot stronger than I am," Josie said.

Josie said it was tough to miss a few holidays without her dad, especially Father's Day. But now the family is looking forward to spending the rest of the summer making memories with grandpa.

"We’ve been missing him being around the house. My kids just came up for the summer, so this is the first time they’ve seen him since coming back. Right when they showed up, that’s when we found out everything," Josie said.

Risingsun, his kids and Mournian all urged the public to heed health officials' instructions on preventing COVID-19 spread. They don't want to have more families experience the suffering and isolation of infection.

"We may find ourselves feeling a little more cooped up than usual, certainly wearing a mask is a very foreign concept for most people. But the benefit in the end is going to be extreme. It may be the difference between us suffering like other states have versus keeping pretty peaceful. So wear a mask, please," Mournian said.