POWELL – The internment of 120,000 Japanese, mostly Americans, during World War II is a story the country should never forget.

That’s the sentiment of some who attended the Heart Mountain Pilgrimage this weekend.

The Pilgrimage honors a legacy and remembers what happened to the 10,000 internees at the Heart Mountain Relocation Center.

“It’s important that people get to know about Heart Mountain,” said Norm Minetta, an internee. “Why it’s here and how do we make sure something like what happened here doesn’t occur again.”

Minetta was a former Congressman and former cabinet secretary under Presidents Clinton and Bush. 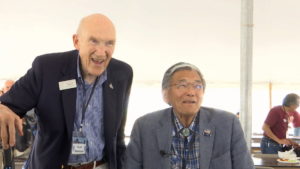 “I was an 11 year old kid,” Minetta said. “So to me the biggest thing that happened was for me to meet Senator Simpson.”

“All I could think about was what kind of a guy he was,” Simpson said about Minetta. “He was full of fun.”

Some at the pilgrimage talked about their experiences. Others told stories about their families. 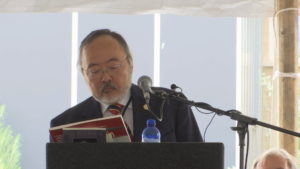 “My parents did not discuss the internment experience with us,” Ito said what his parent told him during his childhood.

Ito’s  family was sent to the Santa Anita race track before being taken to Heart Mountain.

“The next day on Saturday June the 27, Moose Kirkpatrick who was the principal of John Marshall High school drove out to Santa Anita found my mother and gave her diploma,” Ito said.

Ito knew families who took care of the Japanese families farms while they were interned.

“Bill Chandler, the son, when I mentioned to him that i considered him to be a hero and his family,” Ito said. “He said we’re not heroes, we were just trying to be good neighbors.”

Judge Ito talked about the violation of Constitutional rights.

“It was a failure of the American justice system because these people were incarcerated without due process,” he said.

“This is a perfect example of the Japanese Americans who were here, overcoming great odds,” Brokaw said. 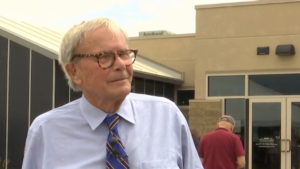 “This is about learning from the people who were here or their relatives,” said Simpson.

“I just want to make sure that this story is not lost,” Ito said.

“If we don’t protect ourselves and keep people aware, it could happen again, ” Minetta said.

Ito’s father James was the farm superintendent at Heart Mountain.

James and Toshi Ito organized the farmers in the camp to grow crops for 10,000 people.

This weekend, the victory garden was dedicated to the Itos.

The Heart Mountain Wyoming Foundation plans to restore the root cellar, which was part of the Ito’s work.