BILLINGS- An invasive species of Asian clam has turned up in Yellowstone County at Lake Elmo.

Shells were found Lake Elmo State Park in Billings Heights, but so far, no live clams.

The clam is about the size of a quarter and different than native clams in Lake Elmo. 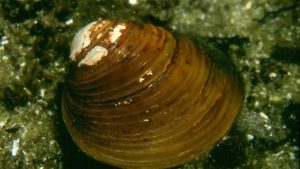 The clam does not have predators in Montana, and it could possibly take away the food for other species, according to Montana Fish, Wildlife and Parks.

The agency has been reminding people to clean, drain and dry their boats.

The shell most likely came from the Columbia River in Oregon, where the Asian clam was first found in 1938.

It possibly came to Montana on a boat or with some fishing gear.

There is a lot that FWP does not know and it will do investigate after determining the species.

Bob Gibson, an agency spokesman, says the investigation will also look in the irrigation ditch before it gets to Lake Elmo.

“The investigation by the biologists now is going to determine how those got here, if there are invasive Asian clams here in the lake, how they got here and have they spread from here into the waters surrounding here,” Gibson said. “This lake feeds a little irrigation system, so it wouldn’t stretch your imagination to think those things could get down into the laterals and on down into the irrigation system.”

Gibson also says the clams can blog screens in irrigation ditches and pipes.