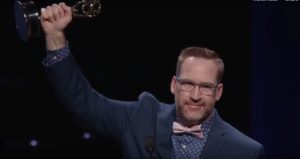 SEATTLE – The Northwest Chapter of the National Academy of Television Arts and Sciences recently held the 56th annual awards ceremony in Seattle and KTVQ is proud to congratulate our own Brandon Sullivan for winning not one, but two Emmys.

In April, Sullivan was honored with a regional Edward R. Murrow Award and is now advancing to the National Murrow Award competition.

We are grateful to have a journalist of his caliber representing KTVQ. Congratulations Brandon! Huzzah!