She then spoke at the Armed Forces Reserve Center. 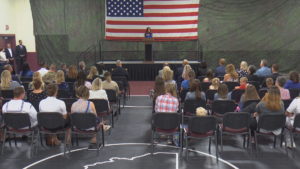 “We appreciate your commitment to our families and the loved ones that we know and ours that are serving,” Mrs. Quinn said in the introduction.

“The strength of our nation does not just come from the people in uniform,” Pence said. “The spouses and families who serve right along side, make tremendous sacrifices to the greater benefit of our country.”

She has her own family connection to the military and talked about her son serving in the U.S. Marine Corps.

“Michael received his Wings of Gold in Meridian Mississippi in September,” Pence said.  “And it was such an honor for us to go and see his wife pin on his wings.”

Pence and the military families took pictures together.

“So I just want you to know that we’re so proud of each and every one of you,” Pence said. “You military spouses are the home front heroes. You really are. You’re the ones that keep our military strong. You are what we like to call the backbone of the military.

She says when military people move, it makes it a challenge for the spouse to find a job.

“Military spouse employment is a very important aspect of a strong and resilient military family,” Pence said. “On behalf of so many Americans across the United States, thank you for your service. God Bless you and God Bless America.”