BILLINGS – Many came out to combat drugs and give hope to those who may be addicted. 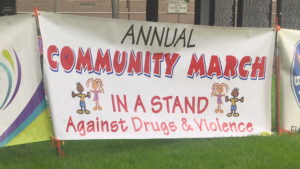 The group marched through three blocks of the downtown Billings area and came to fruition with a gathering at the courthouse lawn. The event was about the community taking a stand against drugs.

Often, those who have gone through treatment and live in recovery can be just the right person for someone going through it. It is many times even better. Recovering addicts have the ability to really understand what the person is experiencing, and can provide hope that there is a solution.

“Even young people who don’t take drugs, they need to see models,” said Mike Yakawich, MADV founder. “Sometimes, a good role model is someone who has gone through recovery.”

Standing in the rain and cool weather helped with the message.

“For us to be out here in this is symbolic,” Yakawich said. “This is serious stuff. When drugs come into a family and destroy a family, it’s cold, cold-hearted stuff. So we’re willing to stand out in the cold and show the community that we care.”

Human trafficking, bullying and alcohol abuse prevention have been some of the issues in past years for the March Against Drugs and Violence.