BILLINGS – A new sculpture called “Thicket” was unveiled under Skypoint in downtown Billings Friday as part of the 25th annual Art Walk.

“Thicket,” created by Sherri Cornett, is a representation of the dogwood and red twig thickets that are found in the Yellowstone Valley.

The sculpture can be found on the northeast corner of Second Avenue North and North Broadway.

Cornett said she views the thicket as a haven for animals and seeds to have a good place to grow.

Symbolically, Cornett said the thicket represents Billings as a protective community where ideas can grow and flourish. 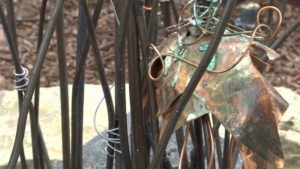 Inspired by her degrees in political science, art ,and passion for advocacy, Cornett knows first-hand of the powerful conversation art can bring.

“Art is a community space. Art can be a place where people can gather. Art can be the start of a conversation,” Cornett said. “And no matter where it is, it seems like when people get together and have the chance to learn about each other and tell each other’s stories. That magic can happen, and that we feel more connected not only to other people, but to ourselves. So this (sculpture) is emblematic of that whole process.”

Cornett is now based in Billings, but her work has taken her across the United States and internationally to China and South Korea.