Woman found dead below the Billings Rims on Sunday evening

BILLINGS – The body of an adult female was found below the Rimrocks in Billings Sunday evening.

The body was found north of Illinois Street and Henry Road after police responded to a call around 5 p.m. by a citizen who found the woman.

Sgt. Ben Milam said there does not seem to be any suspicious activity, but the death remains under investigation. 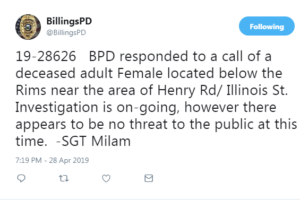