Family and friends came together to help a man recently diagnosed with cancer.

The community responded so quickly, that a fund-raiser for L.A. Trudeau had to be moved to a bigger venue at the Elks Lodge.

Trudeau has stage 4 pancreatic cancer and went through a chemotherapy treatment last month.

He is U.S. Army veteran and served in Operation Desert Storm in 1991.

“With this kind of love and support, it’s been impossible to have any kind of negative outlook,” Trudeau said. “I don’t feel I’ve been given a death sentence. I don’t feel like it’s an uphill battle. I feel like with all the strength and love that I have behind me that it’s going to be easy to conquer it.”

“Trying to stay strong for each other and definitely keep him in high spirits,” said Kayla Navarro, Trudeau’s stepdaughter. “Hopefully that helps a little bit.”

“It shows just how positive he’s being,” said Kelly Navarro, also Trudeau’s stepdaughter. “Can’t help but being the same way. He’s so strong about it.” 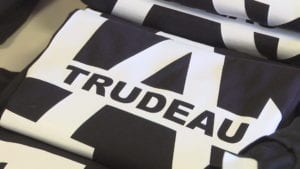