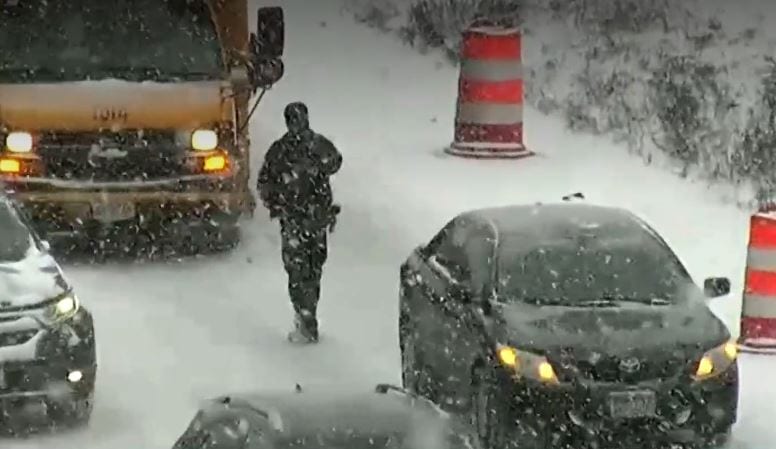 It happened where Interstates 35W and 94 merge in Minneapolis Tuesday afternoon.

A MnDOT traffic camera was rolling. As cars crept along, a Toyota pulled in front of a pickup truck and a school bus. At that point the driver, who police said was 31-year-old Kenneth Lilly, got out and immediately started firing.

The video is difficult to see, but shows what appear to be a couple gun flashes right away. Then, as the man walks between the pickup and the school bus, he apparently fires at least two more times. One final flash is seen as the man stands next to the bus door.

Police say the bus driver was hit in the head but his wounds weren’t life-threatening. He underwent surgery.

A student seated in the back of the bus was unharmed.

After the shooting, the man can clearly be seen on a phone, pacing back and forth. A gun can be seen in a holster on his hip. He’s wearing what appears to be a security guard uniform.

As the first Minnesota State Patrol trooper arrives, the man puts his hands up. He is later cuffed and walked to the door of the bus, then put in a squad car.

Lilly hasn’t been charged yet, but police called the incident especially reckless.

“This raises immense concern on so many levels. The fact that someone is shooting into a school bus, the fact that you’re on a freeway where you have vehicles that are literally stranded because of the weather. You don’t have a clear backdrop for any of these round. This is mind-numbing,” said Minneapolis Police spokesperson John Elder.

The Minnesota State Patrol reports finding a weapon on Lilly.

Police continue to investigate what led up to the shooting.