Hooligan’s touted itself as the place for “The official, unofficial Rams watch party.”

Fans could win Rams memorabilia, including a signed jersey by Cooper Kupp, who played in the Big Sky Conference with Eastern Washington. 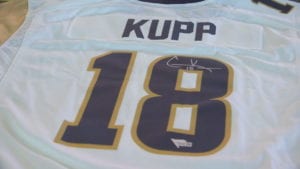 For some fans, watching the Super Bowl at a sports bar makes the game more exciting.

“Super Bowl is huge,” said Nick Fonte, Hooligan’s doorman and barback. “It’s an American tradition. It’s one of the biggest sporting events of the year. Being in an atmosphere where other people are watching the game with you is really exciting.”

Fonte says some fans in the area would like to see the Rams win the NFL championship.

“I’m a Giants fan, not a big fan of New England,” Fonte said. “We’re much closer to L.A. than we are to New England. A lot more Rams fans than Patriots fans. You get a lot of people from different parts of the country, so we’ve got a lot of people that support different teams but when it comes down to it. I think more people want to see the Rams win than see the Patriots win.”

Hooligan’s management says the Super Bowl is its biggest sports day of the year.

Its biggest sports day ever was during a World Cup Match, involving the U.S. men’s soccer team 2012.