BILLINGS – The developer of a huge mansion in Billings’ Ironwood subdivision admitted in federal court in Billings Tuesday to embezzlement and defrauding three companies of more than $20 million and lying to investigators about a false abduction.

According to a release from the U.S. Department of Justice, Price embezzled about $20,321,134 from three coal-related companies; Ninety M, LLC, a Wyoming company, Three Blind Mice, LLC, another Wyoming company and Signal Peak Energy, which operates a Roundup coal mine from about October 2016 until April 2018.

Price was vice president of surface activities at Signal Peak Energy and also operated a private business called 3 Solutions, LLC, which was involved in coal mining.

Price first ran into trouble this summer, when he was arrested in Virginia and accused in federal court of faking his own abduction in an attempt to flee creditors.

Prosecutors had said he used the embezzled $20 million to develop and build the 26,000-square-foot mansion on Canyonwood Drive, on Billings West End, which is the city’s largest home. The listing price was $17 million this summer. 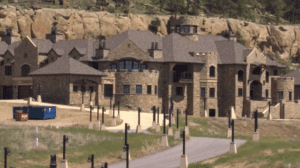 Price had developed a reputation in Billings as a coal mining expert, according to the justice department. Based on his reputation, he convinced Three Blind Mice to lend him $7.5 million, which he stole.

Price maintained that 3 Solutions had secured a contract with a Pennsylvania coal company to install coal mining equipment. To complete the project, Price claimed he needed $7.5 million for expenses from Three Blind Mice.

An investigation found there was no contract between 3 Solutions and a Pennsylvania coal mine.

Instead, Price spent the $7.5 million on unrelated expenses.

In another scheme, Price convinced Ninety M’s investors to appoint him as a representative of the company to help buy and develop coal mining property in Tazewell, Va.

Price engaged in a series of five business deals with other companies on behalf of Ninety M in which he solicited about $13.5 million from the firm, of which $10.48 million was fraudulently obtained.

The firm funneled the money to Price through a bank account registered to 3 Solutions and defrauded Signal Peak Energy of about $2.4 million

In April 2018, the Ninety M investors began to question some of the transactions involving Price and confronted him on the phone.

By April, Price was living in Virginia, where he was originally from.

On April 18, Price learned Ninety M was sending representatives to confront him about the fraudulent transactions and he decided to hide.

Price contacted a woman he knew and agreed to hide at a house the woman had rented.

Late that night, a driver spotted Price standing on the side of the road in Gratton, Va. He was taken to a hospital for treatment and released.

Price was questioned by police and claimed he was kidnapped by men who may have been associated with an outlaw motorcycle gang.

The false statements cost the government significant investigative resources and hampered the investigation into Price’s own wrongdoing.

Price faces the forfeiture of real estate and personal property derived from the crimes, including the Billings mansion and a second home at 5875 Whispering Woods Drive, three properties in Virginia, a motorhome, boat trailers, watercraft, and jewelry.

The government agrees that forfeited property will be used for restitution for victims until all eligible victims have been made whole.

He faces a maximum 20 years in prison, a $250,000 fine and three years of supervised release on each charge of wire fraud, giving a false statement and conspiracy.