ROUNDUP- The Yellowstone County Attorney’s Office has declined to file criminal charges against Musselshell County Undersheriff Shawn Lesnik, citing a lack of probable cause on a misconduct complaint filed in July.

“While some of the behavior in this file is troubling nothing within the file rises to the level of Official Misconduct,” wrote Yellowstone County Chief Deputy Attorney Chris Morris. The case was referred to Yellowstone County by Musselshell County Attorney Kevin Peterson to avoid a conflict of interest.

The July complaint was given to Agent Jeremy Waldo with the Montana Department of Justice, Division of Criminal Investigation. Waldo was assigned to investigate allegations of Official Misconduct regarding Lesnik.

Peterson reported the conduct to have begun in April of 2018 and continued to July of 2018 although no specifics were provided to Q2 News on what the misconduct entails.

The complaint also coincides with two other complaints issued to the Montana Commissioner of Political Practices over allegations from two Roundup women against Lesnik, accusing him of intimidation, harassment and campaigning while on duty.

Lesnik has actively denied those allegations in a statement sent to Q2 News Wednesday. That statement can be found here.

Lesnik is the current undersheriff for the county and is running for sheriff as a Republican. He will face write-in candidate Ronnie Burns in the Nov. 6 election, according to the Musselshell County website. 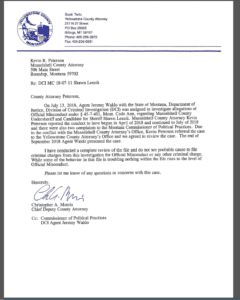