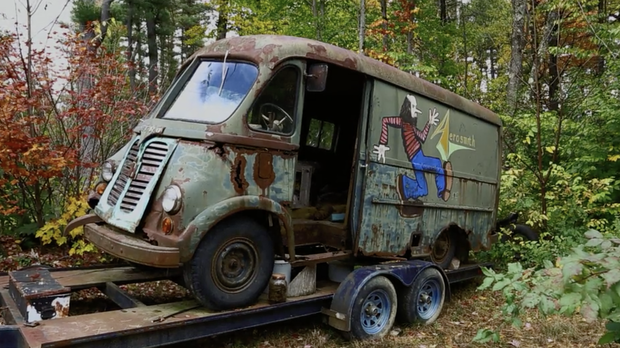 Four decades ago, before Aerosmith was selling out stadiums, the band was traveling New England and trying to become a household name. The band members rode in a funky 1964 International Harvester Metro van with a cartoon man and "Aerosmith" painted in bright colors across the side. Decades later, the dated yet iconic van has been found, and the people who located it know a thing or two about nostalgic vehicles.

The hosts of History Channel’s "American Pickers" say the van had spent years in the woods of a small Massachusetts town after being abandoned in the 1970s. In an episode of the show that aired July 30, hosts Mike Wolfe and Frank Fritz visit Chesterfield, a town about 100 miles west of Boston, to inquire about the van.

The pickers find the dilapidated vehicle with the tires flat, the door missing and the paint rusting off. Still, Wolfe and Fritz, who search the country for valuable pieces of American nostalgia like cars and toys, were willing to pay a pretty penny for the rundown van. Wolfe says it’s "a piece of American rock and roll history."

The International Harvester Metro sat near a house, and the property owner, identified only by Phil, said it was on the land when he purchased it. "This guy is deep in the woods, he’s off the grid, and I keep thinking to myself, ‘what the heck would this van be doing here?’" Wolfe wonders as he and Fritz see the van for the first time. The tale of the van has not been confirmed by CBS News, and it is unclear when Aerosmith abandoned it or why.

Knowing members of Aerosmith were Massachusetts natives, Wolfe and Fritz thought they could connect the dots to prove the van was authentic.

To verify it, they tracked down Ray Tabano, a founding member of Aerosmith, who was in nearby Stockbridge at the time. Tabano was able confirm that their find was indeed the original Aerosmith van.

When he arrived, Tabano reminisced about what he called the "rolling hotel" that transported the band between local shows. "I just flashed back to when we started the band," he said after laying eyes on the van for the first time in more than four decades.

"This is it, baby," the rocker exclaimed when he took a look inside of van, recognizing the carpet on the ceiling falling off, just as it was back in the day. He shared an old photo of himself in the van, and recreated the image on "American Pickers."

Tabano, who played in the band from 1970 to around 1972, said the van reminded him of "humble beginnings."

The owner, Phil, was willing to part with the van — for a price. "American Pickers" paid him a whopping $25,000 to own a bit of rock n’ roll nostalgia.