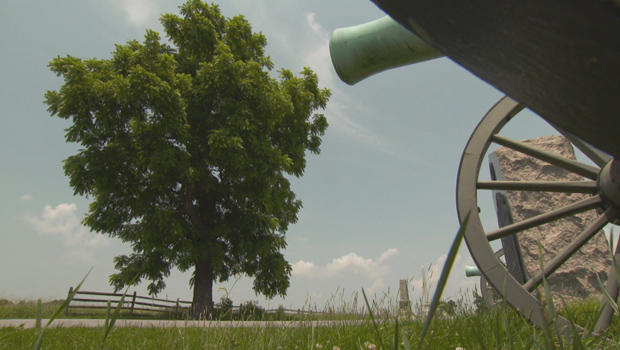 If July the 4th represents the birth of our country, another event in the same month speaks to something else: a time when our nation was put to the test during the Battle of Gettysburg in Pennsylvania. Mark Strassmann has the story of some Civil War era-trees standing witness:

Gettysburg: America’s Armageddon. In July 1863, two great armies, the Blue and the Gray, collided on these fields for three days. It remains the bloodiest battle in U.S. history.

And improbably, 155 years later, there are still living witnesses to that moment in time, otherwise gone to dust and glory: The trees.

Across 6,000 acres of Gettysburg National Military Park, rangers have documented at least a dozen "witness trees" that were alive during the battle – living links that help tell the story of the battle.

A Massachusetts bugler sketched a swamp oak growing next to Union General Daniel Sickles’ headquarters. Today, this massive landmark is known as the Sickles Tree.

"It witnessed a general contemplating a decision, whether or not to move his men forward," said Ranger Atkinson. "And even today, it stands here as a witness to people who are still visiting this battlefield 155 years later."

These Witness Trees remind park visitors, of every age, that the Civil War is hardly ancient history.

Inside the park’s visitors’ center, a tree limb on display is riddled with shrapnel and cannonballs, illustrating how lethal the battle really was.

Historians estimate seven million bullets and artillery shells were fired during the battle.

"If it did this to a tree, what the heck did they do to each other?" one man said.

No one knows the exact number of witness trees here. They’re often identified by photos, sketches, and burial maps.

Some reveal themselves after they fall. In 2011, a maintenance crew clearing a downed tree with a chainsaw struck metal. Bullets were lodged inside the trunk that’s now part of the collection.

"You can see how they just cut clean through," said Ranger Atkinson. "Hidden inside, deep inside, is a bullet that could have taken someone’s life. These are little windows into the past.

A black walnut tree stood in the middle of Pickett’s Charge, which historians consider the war’s most pivotal moment. Across that field, a mile-long column of rebels began that charge from under trees which still stand today. "They would’ve watched these men take their steps across the farm fields not knowing whether or not they were going to survive," said Ranger Atkinson.

Period photographs confirm more witness trees on other Civil War battlefields. The Brompton Oak in Fredericksburg, Virginia, was at the site of an army field hospital.

And at Antietam in Maryland, the most iconic witness tree of all is a Sycamore that still stands next to  Burnside’s Bridge, a survivor of the bloodiest single day in all of American history: 23,000 combined casualties.

Jonathan Pliska, a landscape historian, was part of the National Park Service’s "Witness Tree Protection Program." He described the battle scene for Strassmann:

"During this three-hour siege on the bridge, there was a small American Sycamore sapling right next to the bridge, right where the Union attack was being repulsed over and over and over again. And miraculously, the tree not only survived but grew to this amazing specimen we have today. As a historian, it’s the most relatable thing I could possibly imagine."

Relatable because? "Everybody knows trees. Everybody appreciates trees. I’ve never met one person that says, ‘You know, I don’t really like trees.’"

Trees that once lent shade and comfort to soldiers with just hours to live, that uniquely bring America’s bloody past into the present.

Ranger Atkinson said, "You can put your hand on a cold cannon, but the idea that that tree is living and existed during the time of the battle, for many, is very powerful. Life is still springing from something that was so tragic."