Is President Trump already winning the trade war with China? 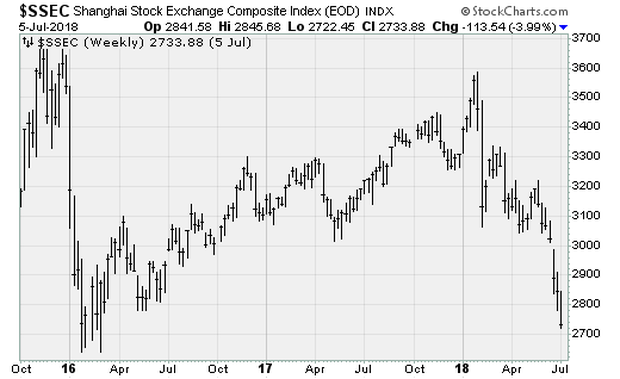 After months of threats and gamesmanship, President Trump’s tariffs on $34 billion worth of Chinese industrial imports took effect a minute after midnight Friday.

It’s the latest in a line of protectionism aimed at the U.S. trade deficit with China, which totaled nearly $600 billion in 2017, and includes tariffs on imports of steel and aluminum as well as items like washing machines and solar panels.

And much more has been threatened. Mr. Trump said on Thursday that another $16 billion worth of tariffs against China are coming in two weeks, and U.S. total alone could reach $550 billion in the next few months.

The actions appear to be having the intended effect, if at the cost of pushing up inflation (prices for washing machine in the U.S. have spiked 16% in recent months, for example). The U.S. trade imbalance with China in May totaled $43.1 billion, down from the $47.2 billion posted in March; it’s the smallest monthly deficit since October 2016 and caps the largest three-month reduction in 10 years.

China responded early Friday with its own tariffs on a $34 billion range of American goods including soybeans and pork. The risk now is that the tit-for-tat that marked the verbal standoff will translate into escalation in action, as each side tries to one-up the other.

There are reports that American imports into China are being slow-walked through customs. Moreover, China’s currency has weakened markedly in recent weeks in a possible bid to offset U.S. tariffs, a strategy Trump frequently called out as "currency manipulation" on the campaign trail.

Much depends on how President Trump and the communists in Beijing play the next round in the trade war game. According to calculations by Goldman Sachs, if the full scope of Trump’s proposed protectionism is implemented, it would raise the total amount of goods subject to tariffs to nearly $800 billion. Or about four times the cumulative amount proposed just a few months ago.

China appears more vulnerable, with Societe Generale economists estimating that the Chinese economy could lose 1 percentage point of GDP growth and upwards of four million jobs while the U.S. would suffer a modest 0.2 percentage point drag on GDP growth.

While U.S markets are taking this in stride, Chinese share prices are down 12 percent over the past month on reports that U.S. export orders have shrunk as customers wait to see what happens with tariffs and thus the cost of sourcing.

According to a report by the AP, Ningbo Top East Technology, which makes soldering irons south of Shanghai, has suffered upwards of a 50 percent drop in U.S.-bound orders, which used to make up roughly a third of its total order book. The problem is that the company is asking customers to split the cost of the tariff hike. But few are willing.

Another wrinkle to the China trade war story is a Reuters report that the European Union flatly rejected a proposal by Beijing to form a strategic alliance to take on the U.S. on trade. This is possibly because Europe knows deep down that China’s mercantilism is real — and that they have been guilty of similar behavior in the past. German Chancellor Angela Merkel, who just barely survived a recent internal political spat over immigration, warned Germany’s lower house of parliament that trade tensions risk reversing the multi-lateralism that quickly quelled the global financial crisis after the U.S. housing bubble popped.

As the trade rhetoric turns to trade actions, business surveys suggest commerce is already being impacted. JPMorgan’s Global Purchasing Managers’ Index (PMI) data show that new export activity has nearly stalled, returning to a low ebb not seen since the middle of 2016 as China was coming off a destabilizing round of currency volatility.

If this impacts U.S. corporate earnings estimates in coming quarters, investors will have no choice but to pay attention. But for now, hope springs eternal that a de-escalation is coming, or, if the trade spat worsens but remains contained, that U.S. equities will fare the best.

Put another way: That America has the most to gain from taking a firmer stance on trade terms. Small-cap stocks, which rely less on trade trends than large-cap stocks, in particular are hot lately, with the Russell 2000 up more than 9 percent for the year-to-date with the bulk of the gains coming since the beginning of May.