As the last of the Toys "R" Us stores readied for final closure this week, workers including store managers with the company for decades decried their plight. They’re saying they shouldn’t be left empty-handed.

The campaign for severance continued until the end, with employees expressing their views in varying ways while working final shifts at some 700 stores across the country.

Advocates say 33,000 Toys "R" Us workers should be entitled to $75 million in severance to help pay the bills while they look for another job.

After declaring bankruptcy in September, the chain in March sought a bankruptcy court’s approval to start closing its 735 U.S. stores, with severance payments coming to a halt during the liquidation. Days before filing for bankruptcy, Toys "R" Us executives drew millions in bonuses, a scenario that didn’t sit well with rank-and-file workers.

When the retailer eliminated positions in the past, severance was always paid, store manager Tracy Forbes told CBS MoneyWatch in May. Forbes, who started with the company in 1987, said she would continue to work until her store in Phoenix, Arizona, closes for good this week. 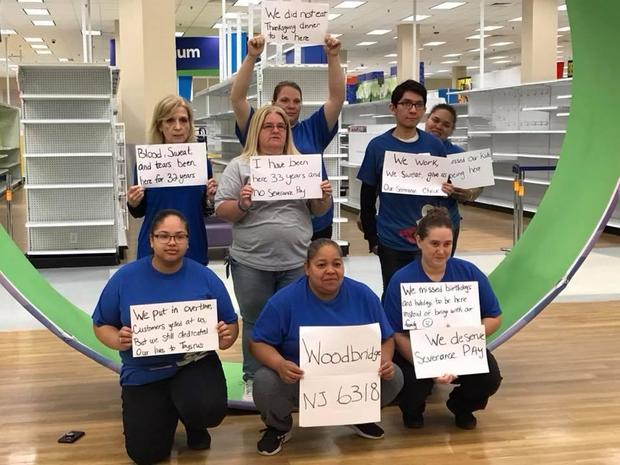 Toys "R" Us workers in New Jersey / RISE UP RETAIL

"Every Toys "R" Us worker is leaving with zero, and Bain Capital is leaving with $475 million in profits," said Forbes, citing a report by Bloomberg that the private-equity owners — KKR (KKR), Bain Capital and Vornado Realty Trust (VNO) — had collected more than $470 million in fees and interest payments from Toys "R" Us during the past few years.

The Center for Popular Democracy and the Organization United for Respect point to Securities and Exchange filings in noting that Toys "R" Us paid $91 million in severance between 2008 to 2016 while being run by the private-equity firms, which took control of the retailer in a leveraged buyout in 2005.

"Because we were forced to liquidate the U.S. business, we were not able to follow the normal severance process," said a Toys "R" Us spokesperson earlier this month. "In lieu of this payment, we were able to provide a minimum of 60 days notice to help employees begin their transitions." At the same time, KKR declined comment, while the other two financial firms did not respond to requests for comment.