In the Irish Channel neighborhood of New Orleans, hungry locals and tourists, young and old, flock to the tiny cinderblock building that houses Turkey and the Wolf. The options are limited with just a handful of sandwiches, along with some "other stuff" on the menu.

"It can be polarizing. Some people are like, ‘Are you kidding me?’ and then some people kind of get excited that it is as casual as it is," said Mason Hereford, the owner of the restaurant. "At the end of the day, if you leave here feeling good, we did our job."

The menu is deceptively simple, each dish crafted from scratch by Hereford and his staff. Despite its renown, it’s been called everything from "stoner food" to "gas station food."

"But it also reminds you that just ’cause something is a casual version of food … it doesn’t make it anything less to enjoy, you know, as a diner," Hereford said.

A number of the items are based on his childhood, like the bologna sandwich. You’ve probably never had bologna like theirs, though. It is sourced from pork raised on a farm in Mississippi.

Along with that comes specially baked bread, a healthy spreading of Duke’s mayo, homemade mustard, melted cheese, shredded lettuce and topped off with house made chips brined in vinegar for 24 hours and fried each morning.

Then, you crush it.

"You gotta make it so you fit it’ll in your mouth so, the crush," Hereford demonstrated.

"You know, I always wanted to be a professional rollerblader. … It’s a very real answer," Hereford said.

Instead, he decided to go to college. Then he followed a friend to New Orleans. 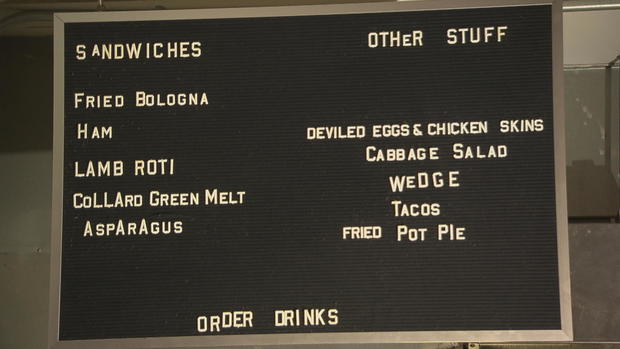 I thought I wanted to be something like college-y, you know? … But it turns out that the service industry in New Orleans can suck you in," he said.

He got a job at the upscale restaurant Coquette and worked his way up to chef de cuisine.

"I love going out and eating fine dining. I do it every chance I can. … I just wanted to have more fun and I wanted fun to be more of a guarantee," Hereford said.

So he opened up a little sandwich shop for him and his friends to work in. Soon everything changed when Bon Appetit named Turkey and the Wolf the best new restaurant of 2017.

"I came in and realized, ‘Oh, so this is gonna change things,’" Hereford said.

Bon Appetit editors Julia Kramer and Andrew Knowlton each made the pick. 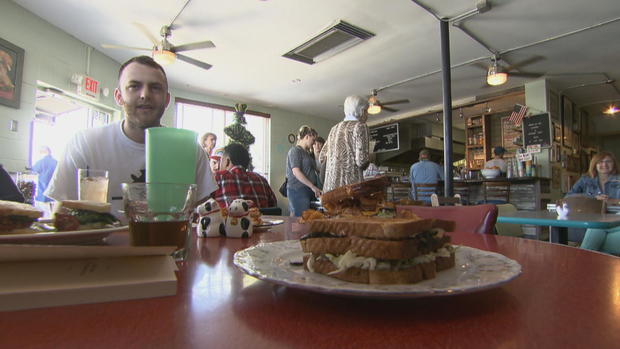 Turkey and the Wolf CBS NEWS

"We were at the tail end of months of traveling and eating and looking back on it, we really had to think, like, ‘Okay, what was the most delicious food we ate? What was the best time that we had in a restaurant?’ And it was kind of an easy choice. It was, like, ‘Well, duh. It’s Turkey and the Wolf,’" Kramer said.

"It’s a whole new curveball when 400 people walk in on a Saturday," Hereford said.

But he refuses to take the notoriety too seriously. He uses social media to promote the restaurants he believes also deserve attention and to poke fun at himself, calling his food "overrated."

That playful spirit is apparent at the restaurant, where a sign hangs on the door that reads "people hate us on Yelp" and another on the wall that declares "this place sucks."

"These are all facts. We try to keep a sense of humor about it. We know so many things have gone our way, and we just — we have to be realistic," he said. "And we don’t want people to think that we knew that it was ever gonna happen, ’cause there’s no way to ever plan for this."

Hereford and his team are opening a breakfast restaurant called Molly’s Rise and Shine, in late fall, in New Orleans.