Joel Evans has been fishing the same stretch of the Gunnison River in western Colorado for more than 40 years. Like most anglers in those parts, for him, one species of fish is king: the rainbow trout.

What does he like about them most? "There’s a bit of fight involved," he said.

But in the 1990s, that fight between fish and fisherman shifted to one between rainbow trout and a parasite that invaded Colorado rivers. It causes whirling disease, an aquatic plague where young fish are deformed, swim in circles and die of starvation.

Ever since, Renzo DelPiccolo of Colorado Parks and Wildlife has been working to keep the rainbow trout alive through various breeding programs, but at great cost and with only limited success. He’s seen a tenfold decrease in the fish’s population. 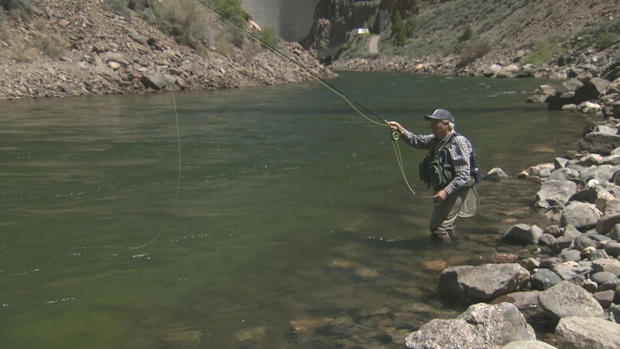 "The rainbow trout is hugely important to this state," he said. "Fishing in general — it’s estimated over $2 billion to the economy."

Scientists got a major break when they discovered a small isolated group of rainbow trout immune to the disease in a remote part of the Gunnison. There’s disagreement over where they came from, but researchers now agree that their mission is almost biblical: turn those few fish into many.

That’s why biologist Eric Gardunio cruises the waters where the immune trout were discovered to capture healthy female fish and use them to breed tens of thousands of offspring that are also immune to the illness.

"Usually we’re going to have about a day when those female’s eggs are ready to be spawned and collected by us, so we’re out here kinda looking for a needle in a haystack," Gardunio said. 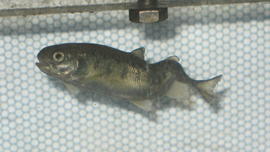 They use a spindly apparatus to send a weak electric current through the water that attracts and then stuns the trout.

"And then it’s just up to our netters to be quick with their net … and get those fish out of the water as quick as possible," Gardunio said.

The process depends on touch and time — the touch for getting the eggs out of a female, and less than a minute to use the male trout to fertilize the eggs.

The fertilized eggs are brought to a nearby hatchery, where they are cultivated and raised into healthy rainbow trout, ready to stock rivers all over Colorado.

"We’re starting to develop wild fisheries of fish that can reproduce and survive on their own, without our help," Gardunio said. "We know these fish are resistant to the parasite and we’ve actually seen a threefold increase in the number of rainbows we have since we started doing that," Gardunio said.

While that’s good news for Colorado’s economy, it means even more to fishermen like Joel Evans, who know the true value of the sport.

"It’s where it takes you to — places like this canyon," Evans said. "It’s the fun of going. It’s the adventure. Sometimes fishing’s just kind of part of it."

With a little luck and a lot of science, they’ll be telling fish stories here for decades to come.