MISSOULA – Local emergency managers are reporting that recent heavy rain has water levels on the rise again in Missoula with a Flood Advisory now in effect of Missoula.

The Clark Fork River above Missoula is expected to rise by as much as a 1½ feet in the next 24 hours and overland flooding and pooling groundwater is already occurring in the Tower Avenue and Kehrwald Street area. Additionally, ground water in the Orchard Homes area may impact wells and septic systems.

Filled sandbags are once again available at Fort Missoula.

The water level on the Clark Fork River above Missoula is rising and is expected to crest at 8.94 feet at around 12 p.m. on Wednesday. The most up-to-date river forecasts are available here.

The National Weather Service is also cautioning that widespread flooding from East Missoula to the Bitterroot River is possible including streets and homes in the lower South Third Street area. 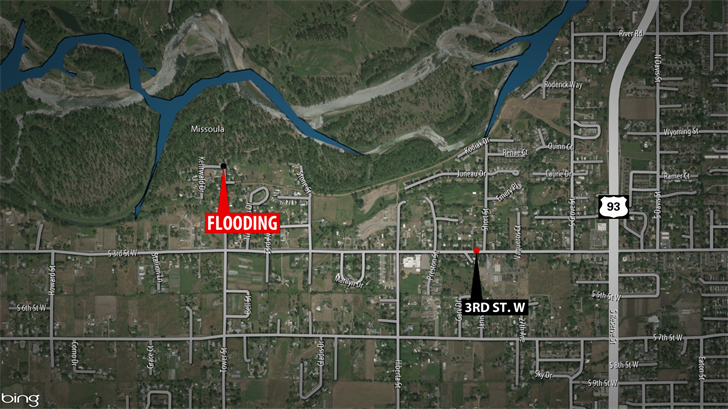 Flooding is possible along the Clark Fork River from Reserve Street through the Orchard Homes residential area toward the confluence with the Bitterroot River near Kelly Island. Flood waters are now flooding Tower Street, Kehrwald Drive and Channel Drive with 10 to 15 homes being flooded.

The Tower Street Conservation Area remains closed due to flooding, downed power lines, and trees that present hazards to the public. The City of Missoula will reopen the area when these safety concerns are resolved.

Heavy rain has also caused some major flooding issues in parts of Lewis and Clark County.