The Federal Reserve raised a key interest rate another quarter-point on Wednesday. The federal funds target rate, which is now between 1.75 and 2 percent, is the highest it’s been in nearly a decade, indicating that the nation’s central bank has confidence the economy will continue to expand.

"The main takeaway is that the economy is doing very well," chair Jerome Powell said in a press conference. "Most people who want to find jobs are finding them, and inflation and interest rates are low."

The central bank said it expects two more rate hikes this year, which would making four rate hikes for 2018. That indicates a slightly faster rate of increases than analysts had expected, reflecting the Fed’s view that economy is in good shape. To that end, the Fed’s carefully worded statements are getting more hawkish. Wednesday’s statement said the economy is "rising at a solid rate." Notably, it also cut a line from the previous statement that said the Fed was likely to keep rates low "for some time."

This "shows no sign of a pausing Fed, rather one that is increasingly confident in its ability to continue hiking," analysts with investment bank UBS wrote in a note.

But the "neutral" rate remains uncertain. After keeping interest rates low for years to boost growth, the central bank is now moving rates back to what economists say is a neutral position—one that neither boosts growth nor depresses it. One problem: There’s little agreement on what a neutral number is.

"We know we are getting closer to that neutral level. We don’t know what that will be," Powell said. 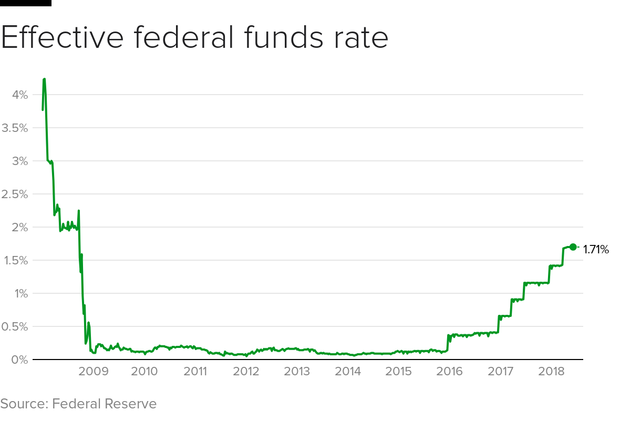 Last year’s tax cuts are boosting economic growth, Powell said, but weak wage growth remains "a bit of a mystery." "It makes sense that if you lower the corporate tax rates, you will encourage greater investment. That should drive productivity, that should drive faster output," Powell told reporters. But the exact amount of the impact is uncertain, he said.

One area that’s growing less than expected is workers’ earnings, Powell conceded. "I certainly would have expected wages to react more to the very significant reduction in unemployment we’ve had," he said. "Everywhere we go we hear about labor shortages, but where’s the wage reaction?"

Government data show that hourly earnings are rising at an annualized rate of 2.8 percent, and even a touch more for lower-income workers. So-called core inflation — which excludes volatile items like energy and housing — is now 2.2 percent, around the level the Fed is looking for. Paychecks aren’t soaring, in other words, but at least most Americans are staying ahead of inflation. 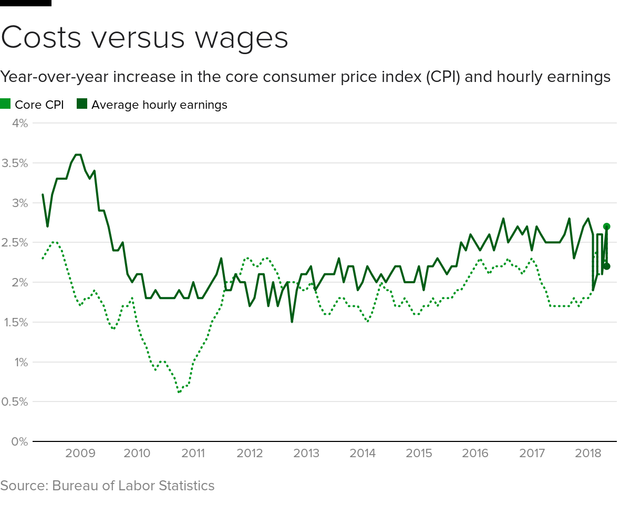 Consumers can expect interest rates to rise for all types of debt. The most immediately affected will be credit-card interest rates, which are subject to near-instantaneous revision to track the federal funds rate. Rates for car loans and variable-rate mortgages are also likely to increase.

Rates for conventional mortgages are likely to see more gradual change. The average rate for a 30-year fixed mortgage hit a high of 4.8 percent in the last week of may before dropping slightly.

Rates for savers have tended to lag the Fed’s hikes. The top interest rate currently on offer for a savings account is just 2.05 percent, according to Bankrate, with the average rate only 0.06 percent.