Musicians on call: Just what the doctor ordered 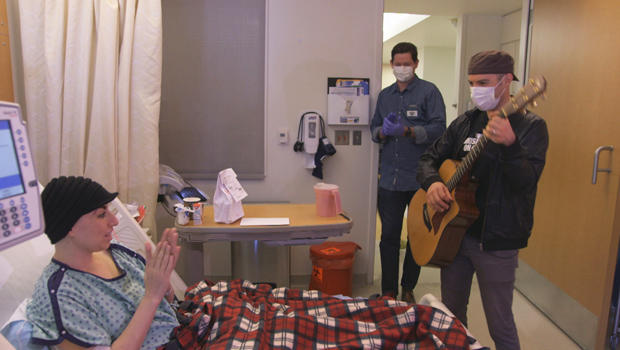 Kenli Mattis performs for a patient at City of Hope. Singers from Musicians On Call make the rounds, bringing a musical healing to hundreds of thousands of patients. CBS NEWS

A little music seems like just what the doctor ordered for some patients CBS’ Nancy Giles has been visiting:

With his guitar case in hand, Kenli Mattus shows up for his usual gig, in an unusual spot. Mask in place, he’s ready to greet some folks who can’t get out much. At least once a week, Mattus puts on his best bedside manner for hospital patients.

Giles observed him perform The Beatles "Something’ for Mayra Reyes. "There are so many different people I’ve played to," he said. "I’ve played to tens of thousands of people over the years."

Reyes is a cancer patient on the bone marrow transplant floor at City of Hope Hospital in Southern California. She told Giles, "It makes the day happier, it makes the day more hopeful. Music just makes everything better."

Mattus is part of an organization called Musicians on Call. Like doctors making rounds, the non-profit group has been bringing musicians to hospitals all over the country for almost 20 years, including some big-name musicians. Patients have been treated to their own private concerts by Nick Jonas and Pharrell Williams. Country fans have hung out with Keith Urban and Kelsea Ballerini.

Musicians on Call has played for more than 600,000 patients. It’s a person-to-person experience, one that Kenli Mattus finds more rewarding than the arenas and clubs where he started his career. "There’s so much about being an artist or being a performer, you wonder, ‘Is what I’m doing important? Is this about me? What is this about? Why do I wanna do this?’" Mattus said. "And then you do this, you say, ‘Oh, yeah. I could be there for other people.’"

As Mattus and Giles continued their rounds at City of Hope, they stopped into Vernon Davis’ room. When asked if she had any requests, Davis said, "Do you know any Deep Purple?"

Mattus obliged with "Smoke on the Water."

The environment may be sterile, but Mattus is infectious. "Even the mess-ups are cool, because it’s really about being in the moment – ‘Oh, I messed that up, you wanna sing with me?’" Mattus said.

"We crack doors [for] people that don’t really want to come out, so that they know they can still hear the music, and it makes them happy."

Davis told Mattus, "I’m so thankful, I don’t know what to say!"

"I can’t walk into a room and change someone’s day, but as a musician they could walk in and play a song and, three minutes later, that person’s day is forever changed," said Pete Griffin, president of Musicians on Call.

"In the beginning, we were knocking on doors, saying, ‘Hey, this is valuable. This is important.’ And then what we’ve seen over the past 20 years is that the science has really caught up to what we’re doing. And now, the hospitals are saying this is actually part of the healing process. This isn’t something that’s just a nice thing to do, but this is actually helping our patients."

Professor Matthew Loscalzo, a specialist in pain management at City of Hope, said, "We know that music makes people less anxious. We know that people who listen to music and experience it deeply feel less pain. That is science. We know that with music you feel less depressed, right? You feel more energized. You feel more connected to something bigger than your immediate experience."

Giles also tagged along with country superstar Luke Bryan as he visited Lenox Hill Hospital in Manhattan and performed "Play it Again." 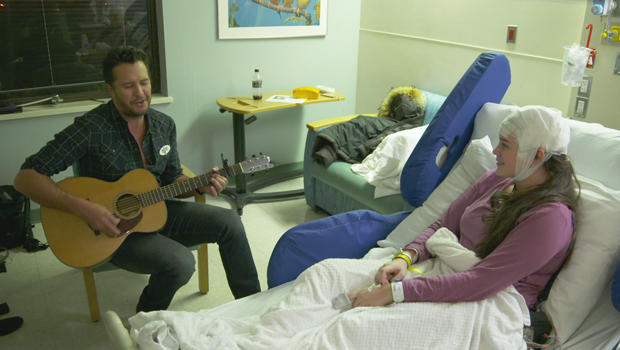 He says it’s not just about the patients. "Trust me, I get in the habit of being all about me from time to time. So whenever I can make it not about me and make it about somebody else and put them first, I think it does your body good."

Bryan’s body of work can get a little racy at times, which can create an issue. "All my songs aren’t nursery rhymes!" he said. "So, when I have to play them for kids, I’ll do a little editing on the spot for ’em."

Back at City of Hope, a nursery rhyme turned out to be just what the doctor ordered, and Kenli Mattus was ready, playing "Wheels on the Bus."

Two-year-old Christopher Leak is a natural-born percussionist, so Mattus created a song for him on the spot. 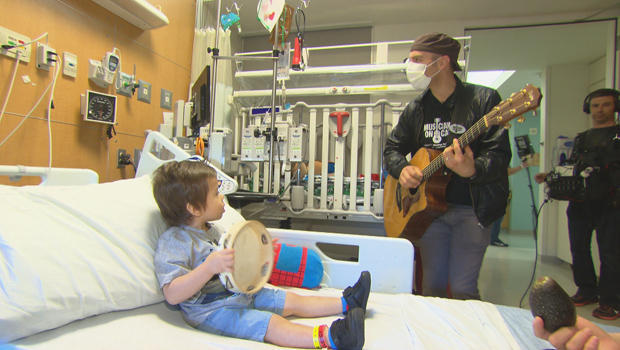 "Usually it’s just whatever’s off the top of my head, and then, ‘Let’s make up a song,’  which is sort of the go-to if you have no idea what to do!"

Mattus had one last appointment on this day. He visited Jauniece Victor and her husband, Isaac, delivering a bit of healing … and hope.

"I feel I can walk outta here now!" Victor laughed. "I feel like it’s time to go home!"

"Reminds us of that dance floor, so now we looking forward to getting back to it!" Isaac added.