Why many Silicon Valley parents are curbing their kids’ tech time

In Silicon Valley, devices are an essential part of daily life. But many of the tech titans creating these products choose to power down when they leave the office, following industry giants like Bill Gates and Steve Jobs who restricted their own kids’ access to technology at home.

Pierre Laurent, who has worked for companies including Microsoft and Intel, said he and his family typically leave their phones at a table to charge when at home. He says the tech industry designs products to hook users.

"I don’t think the parents are aware of that. They don’t see the consequences because nobody’s told them, you know. There’s no warning on the product," Laurent said.

Pierre and his wife Monica became concerned that their three children would miss out on real-life experiences while on their devices so they decided to limit their screen time. Researchers are still learning more about how technology affects kids but some early studies of heavy tech users show potential links to a rise in teen suicide rates, addiction, anxiety and loss of social skills.

"There was some pressure, especially the last one," Pierre said of how his kids react to the rules. "She didn’t want to miss out on something and then we said, ‘no it’s not the right time.’"

None of the three children played video games or watched TV, and they didn’t get cell phones until they were teenagers. Their 13-year-old daughter Maia spends her free time knitting and playing in the backyard.

When asked if she ever misses technology, Maia said, "Not really….The only thing I might miss technology for is listening to music or an audio book."

Their use of tech is limited both at home and at school. At the Waldorf School, where Monica is a teacher, nearly 75 percent of the kids have parents who work in tech. The school favors physical activity and art over technology. Computers are not introduced until eighth grade. Teachers use a hand clapping game to practice multiplication tables. 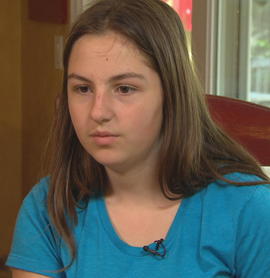 "Every parent is really struggling with how to reap the benefits of technology while minimizing some of the risks," Caroline Knoor said. She is the senior parenting editor for Common Sense Media, a non-profit that studies the effect of media and technology on kids.

"We do need to look at the technology itself and understand that there’s a lot of stuff in there that is absolutely designed to change user behavior and these programs are reaching children at younger and younger ages," Knoor said.

The organization says there’s no magic number on how much screen time kids should have and cautions that imposing limits ignores potential benefits. They recommend paying close attention to kids’ demeanor while using their devices and creating a schedule with guidelines on the types of tech activities they can do – and for how long.

Even after getting a cellphone this year, Maia says she prefers to spend time baking and doing crafts.

"I do stuff with my hands a lot," Maia said. "I find it more fun to do that than to just watch stuff and go on social media."

For Monica and Pierre, the hope is that a tech-free childhood will lead to more balance later in life.

"I really believe that there is a time for technology, it’s not a forbidden fruit, it should not be. But I think especially young children need to grow in a different environment that doesn’t have that much technology in it," Monica said.