Recreational marijuana is still against the law in 41 states. But a number of celebrities with their own brands to sell are seeing green all the same. Our Cover Story is reported by Ben Tracy:

Hollywood has long been addicted to a good marijuana joke. And now that pot is legal for recreational use in nine states (with more on the horizon), some celebrities are laughing all the way to the bank.

And who better than Tommy Chong to be one of the first so-called "ganjapreneurs"?

It’s a natural fit given he gladly let his career go "up in smoke." He and his partner Cheech Marin practically invented the stoner comedy.

Tracy asked, "How much of what you have in this life is due to [marijuana]?"

"Everything!" Chong replied. "All the movies, all the records, my nice house in the Palisades. My Tesla. You look at me, I’m a high school dropout. But marijuana, really, it’s been responsible for everything."

Including a nine-month stint in prison in 2003 for selling glass bongs on the internet.

But now he’s legit, selling a line of organically-grown cannabis called Chong’s Choice. And as the face of the brand, well, he has to make sure it’s good.

"I’m the tester," he said. "I’m the guy that smells it, feels it, puts it in my pipe and smoke it. … Quality control all the way!"

When asked if it’s hard to find high-quality plants, Chong laughed, "Only if you’re really high!"

Chong’s Choice is for sale in six states, and as with any other product, name recognition matters.

Tracy asked, "Do you think somebody who walks into a store like this for the first time and sees your name on something says, ‘Okay, I know him. I trust this’?"

"Absolutely. Absolutely," Chong replied. "Especially with me, you know, they know the movies, they know me from all sorts of, like, ‘Dancing with the Stars,’ for instance? I’m quite sure that, subliminally, a lot of those old guys are goin’, ‘Geez, I better start smokin’ some pot, too!’" 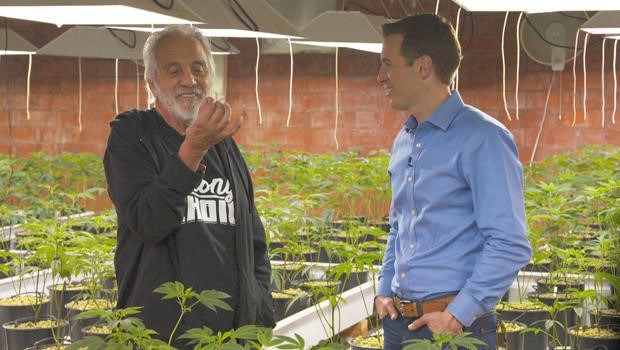 From fashion to fragrance, to beverages both hard and soft, celebrity sells. And with marijuana sales expected to reach $8-10 billion by the end of this year, and projected to double to $20 billion by 2022, more celebs are investing money and lending their names to get a foothold in this growing market.

Chris Walsh, founding editor of Marijuana Business Daily (yes, there is such a thing), said, "This was an industry in the shadows. It was all around on the black market for many decades. It kind of rose up very quickly. A lot of people were shocked by how fast it materialized.

"You get someone who’s not as familiar with marijuana, maybe they’re a tourist, maybe they’re a local, they haven’t done it since college, and they go into a store and there are 50 jars with different strains, and they’re all named something different."

He says celebrities such as Chong, Willie Nelson, Snoop Dog and even Whoopi Goldberg are helping marijuana go mainstream.

"What we’ve found is that the stores can basically charge an average of a 25 percent markup over the same type of product that doesn’t have a celebrity name on it," Walsh said. "So, clearly consumers are willing to pay more, and it’s working."

Grammy-winning artist Melissa Etheridge is getting in on the act, from the ground up; she calls 47 acres in California’s Santa Cruz Mountains Etheridge Farms.

"I wanted to be in the front of this because I feel that there’s not a representation for middle-aged women in the cannabis industry," Etheridge replied.

This new business venture is personal. Etheridge says she discovered the healing power of marijuana during painful chemotherapy sessions after she was diagnosed with breast cancer in 2004.

"And so they gave me, like, super-duper-duper chemo, which was really, really horrible," Etheridge said. "Especially in your gastrointestinal system. So immediately, as soon as I took the first chemo, and you start feeling it by the end of the night, I smoked. And you get instant relief from nausea, and you have an appetite."

"It’s pesticide-free," she said. "It’s the quality, and it’s measured out. You’re gonna be able to understand what the dosage is. That’s the product I want to present." 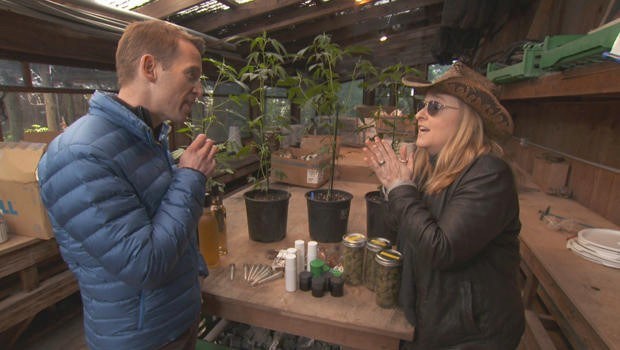 There are even edible products, like gingersnap weed cookies and other baked goods. And then there’s the cannabis-infused lavender cream.

She said, "Arthritis sufferers swear by this. Women who haven’t been able to knit for years have put it on their hands, they cover it with gloves overnight, and they wake up, and believe me, it’s so effective. It’s kind of sad that it’s not out in the world."

Etheridge Farms is not yet up-and-running, but she hopes that putting the Etheridge name on her products will lead to more people experiencing a higher level of relaxation.

"Life is hard enough; let’s take it easy on ourselves," she said. "We don’t have to go through life, you know, clutching the steering wheel. You know, we can relax a little bit!"