Back to “Mister Rogers’ Neighborhood” 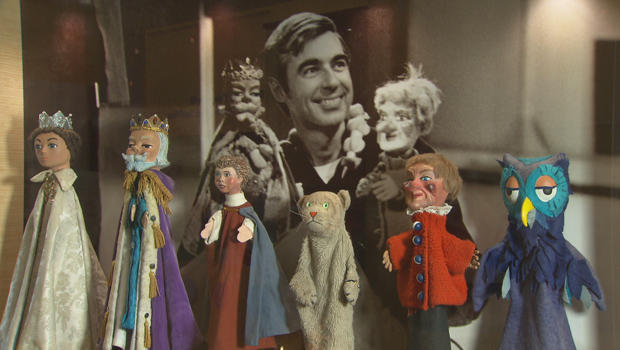 Some of the populace of puppets from the Land of Make Believe. (CBS NEWS)

"Mister Rogers’ Neighborhood" has been must-see TV for countless American children over the years. This morning we’re BACK IN THE NEIGHBORHOOD, with CBS’ Faith Salie as our guide:

His song, his smile, and his sweaters are old friends to generations of children who grew up with Mister Rogers.

"Won’t you be my neighbor? Welcome, neighbor!"

David Newell was Mr. McFeely, the neighborhood’s speedy delivery man. He was also the show’s props guy and PR man. "We had a very small staff," Newell said. "It was like, ‘Let’s get together and put on a show!’"

Nick Tallo, the floor manager (and the neighborhood’s Court Jester), told Salie, "People always asked me, ‘Did you learn anything from working on the show?’ And I said, ‘After that many years, I could build a house out of construction paper and round-tip scissors!’"

"I gave him lots of hard times!" Tallo laughed.

But when it came to helping children make sense of a very complicated and often troubling world, Fred Rogers was a man with a mission.

"Love is at the root of everything," Rogers said. "All learning. All Parenting. All relationships. Love, or the lack of it."

Oscar-winner Morgan Neville’s new documentary "Won’t You Be My Neighbor," is an exploration of Fred Rogers, the man.

"I think what he was trying to do is teach us how to be human," said Neville.

"This new medium was coming, television. He recognized something from the moment he saw it, that many generations of children were going to be raised by this thing, and that somebody had to use that as a tool to help children."

"Mister Rogers’ Neighborhood" went on the air nationwide in February 1968. Fred Rogers, an ordained minister who studied early childhood education and music composition, wrote the scripts, the songs, and created the characters.

He also did the voices for the puppets, like Henrietta Pussycat. "Each of those puppets in the Land of Make Believe is actually some facet of his personality," said Neville.

Including Lady Elaine Fairchilde, the troublemaker ("I’m starting my own television station!"), and the blustery King Friday ("If it were not for me, there would be no television!").

"All of the insecurities and fears that Fred had as a child, he brought out through Daniel Tiger. Many of us tend to forget all of our childhood fears, and Fred didn’t forget any of that."

From the beginning, the program talked to children about difficult subjects, even those familiar 1960s traumas that adults had trouble understanding, like "assassination."

Neville said, "As simple as his show seemed, it was anything but simple. There was so much thought and consideration that went into every single thing he did."

As Rogers himself remarked, "I’ve been terribly concerned about the graphic display of violence; there is just so much that a very young child can take."

In 1969, with battles over desegregation raging, Mister Rogers invited the neighborhood’s Officer Clemmons to share his kiddie pool.

Francois Clemmons was 24 years old, and an aspiring operatic tenor, when Fred Rogers first asked him to visit the neighborhood. "I thought it was ‘Civil Rights Light,’ that pool of water was so insignificant," Clemmons said. "I didn’t quite get the impact of the symbolism, that so many people would see it and totally understand it.

"He walked around with me and showed me the tree, the clock, the castle. And I thought, well, all that’s well and good, but there was a part of me thinking, what does that have to do with me? I’m a ghetto boy! I grew up in Youngstown, Ohio, the steel mill. Guys that I grew up with gambled. They drank. They did other things that were not so positive, but they didn’t play with puppets."

Clemmons says he didn’t get Fred Rogers’ message for a long time. And then one day…

In 1969, Joanne Rogers watched from home as her husband testified before Congress, defending public television to a skeptical Senator John Pastore.

"He was very nervous," said Joanne. "And I could hear it in his voice."

Fred Rogers: "I’m the host, and I do all the puppets, and I write all the music, and I write all the scripts."
Sen. Pastore: "I’m supposed to be a pretty tough guy, and this is the first time I’ve had goosebumps for the last two days! … Looks like you just earned the $20 million."

May 1, 1969: Fred Rogers testifies before the Senate Subcommittee on Communications by danieldeibler on YouTube

"Pastore was a marshmallow underneath!" Joanne laughed.

"That’s what Fred Rogers could do; he could get to everybody’s marshmallow!" said Salie.

When asked what he misses most about his dad, Jim Rogers said, "I would have to say probably his sense of humor. That’s one thing people don’t really quite get, is he was a funny guy."

Jim says his father would sometimes use the puppet voices at home: "If we were at dinner, and there was something that he wanted to say that wasn’t particularly Dad-like, he would use Lady Elaine’s voice. Whoa! Where’d that come from?"

At the Fred Rogers Center in Latrobe, Pa., Emily Uhrin is archiving songs, scripts, memorabilia, and thousands of letters addressed to Mister Rogers.

"It’s amazing what they were comfortable sharing with Fred – "What do you think about this? How can I deal with this?" And Fred did respond to every letter that came in."

But Fred Rogers did have his critics, and there were myths: he had been a sniper, and that he had tattoos.

Neville said, "We tend to think that most of our cultural figures have some dark side, and we’ve seen so many of our cultural icons falling from grace, so you almost expect it at this point.

"One of the most exceptional things about Mister Rogers is that he was exactly who you think he was," Neville laughed. "In fact, he was even a better version of that person!"

Fred Rogers died in 2003. His gentle message of tolerance and love, says Neville, is more necessary today than ever.

"What he left in the millions of us who grew up watching him and loving him, that’s his legacy."