A new study published in Annals of Neurology found kids who start playing tackle football before age 12 will, on average, develop cognitive and emotional symptoms associated with the degenerative brain disease CTE much earlier than those who start later. One California family whose son began playing football at 9 years old is blaming the sport for his early death.

"I loved my son. He was just a wonderful kid," an emotional Gregory Ransom told CBS News. He is heartbroken about the loss of his 13-year-old son, James. Just over a year before his death, James suffered a brutal hit to the head while playing football as a lineman. After the game, his dad noticed blood around his ear.

"He was known in the neighborhood as a kid who’d fall down and just get right back up and go play and he didn’t, he never cried. I talked to him about these things and he said, ‘Well, I get my bell rung all the time playing football.’ And it was shocking to me to hear that," Ransom said.

James’ sister, Julia, said his personality began to change immediately after the hit.

"You could just look into his eyes and he just wasn’t the same person. And just, you could see that inside he knew he was hurting and he was struggling so that was really hard to deal with as a sibling just seeing that happen and not knowing what to do," Julia said.

James suffered from short-term memory and vision loss and OCD. He attempted suicide just three months after the hit and was committed into a mental institution for a month. Nearly a year later, he took his own life. 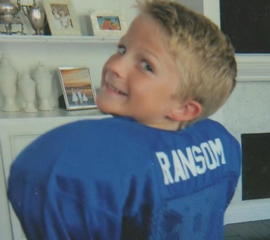 "You think this is all because of football?" CBS News asked.

A new study published in Annals of Neurology looked at the brains of 246 deceased amateur and professional football players. Two-hundred-eleven of them had the degenerative brain disease known as chronic traumatic encephalopathy, or CTE, which can be caused by repetitive hits to the head. The study showed kids who began playing tackle football before the age of 12 began showing cognitive and emotional symptoms associated with CTE an average of 13 years earlier than those who started after 12.

"It’s concerning because it was such a change," said Dr. Ann McKee of Boston University, the study’s lead researcher.

The Ransom family did not get James’ brain tested for CTE, but they hope to prevent his injuries from occurring in other children.

"I want parents, mothers and fathers, to know the science and to know what’s happening to their sons’ brains, because… if a mother knows what’s happening inside that helmet, she’s not going to let her son out on the football field," Ransom said.

The study also showed that for each year earlier kids begin playing football, their symptoms will progressively show up about two and a half years sooner.