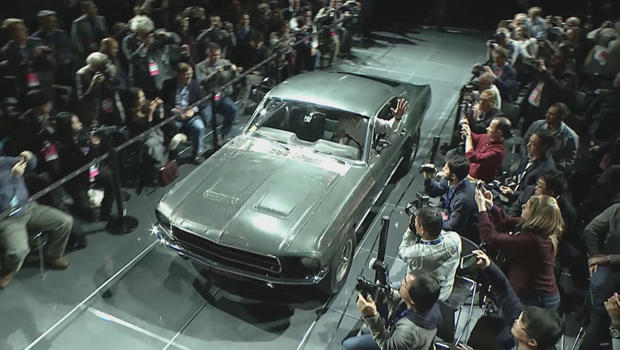 This morning, CBS’ Mark Strassmann was in hot pursuit of the most famous, yet most elusive Ford Mustang of them all:

Audiences felt as though they were riding shotgun. It was Hollywood’s first major car chase shot not on a studio lot, but in real- time, at real speeds, out on the streets and hills of San Francisco.

"I think McQueen was the key to designing this in a way that had never been seen before," said Tim Zinnemann, the movie’s assistant director. He said at one point director Peter Yates closed off 60 square blocks of the city.

And how much driving did McQueen himself do? "As much as he could get away with," Zinnemann replied.

Driving faster than 100 mph meant a number of close calls. McQueen, an accomplished race car driver, blocked out the chase scenes himself.

But the movie’s other star was its 1968 Ford Mustang GT Fastback. Together, car and driver were the epitome of old-school cool.

"He was cool, but he was enthusiastic and going to details and wanting things to be right," said actress Jacqueline Bisset, who played McQueen’s girlfriend in "Bullitt." She was 23, and breaking into Hollywood.

"It was a beautiful car, the Bullitt car," she said.

"Do you understand why the car has the mystique it has?" Strassmann asked.

"You’ve had your share of on-set experiences with alpha males … where does McQueen rank?"

After the movie, the Bullitt Mustang was just as stealthy — it disappeared. For decades, the Mustang became the Holy Grail for car collectors.

And it became a "family secret" for Robbie Kiernan, though she told Strassmann, "It was never meant to be a secret, it was just our car."

Her late husband, Robert, saw an ad in the back pages of Road and Track Magazine, and bought the Bullitt Mustang in 1974 for $6,000.

"It was unbelievable," she said. "We had seen the movie, and then to see the car…!"

It still had the camera mounts underneath the chassis, and a huge hole in the trunk for the smoke machine.

The growl of the Mustang’s V8 engine was deafening. "I taught at a Catholic school, and the nuns heard the car and said, ‘Well, there’s Robbie!’" she said.

At one point Steve McQueen tracked them down, and asked the Kiernans to buy back what he called "my" Mustang.

Said Robbie, "It was part of our family at that point. We had too many memories."

"The reality is that it was your car, and you weren’t giving it up."

After 1980, the car was garaged, out of sight, in a barn on their family farm in Tennessee. "This is the most personal thing that we have," said Robbie’s son, Sean Kiernan.

For him, the car’s star power means more than Steve McQueen. "It’s not just a ’68 Fastback; it is my dad’s car," said Sean.

The Kiernans are finally going public with the family secret … rolling it out at the Detroit Auto Show, in its original faded glory.

Strassmann said, "You can make the case that every car deserves to be treated lovingly as this one has."

"This one definitely, definitely has a soul," said Sean Kiernan.

It’s now registered as a historic vehicle, and touring the country, appearing before a whole new audience.

Strassmann asked Robbie Kiernan, "Does it feel weird to show it off after hiding it all these years?"

"Very much so," she replied. "I was emotional seeing it go.  It was like a family member leaving the house."

Even people who don’t live for cars — like Jacqueline Bisset — sense something special with this one.

"I think it was you who said they take the car seriously, the people who own it," she told Strassmann.

"Very. They’ve really treated it as the true star of the movie."

"Good to know!" she laughed.

"Bullitt" AD Tim Zinnemann said, "I think what we did, there was an emotional connection to the cars, the drivers, the scene itself. And it was all real."